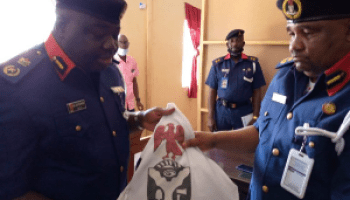 Mr Valentine Ezenyimulu, the new commandant of the Nigeria Security and Civil Defence Corps (NSCDC), Enugu State Command, has assumed duty and promised a rapid transformation of the organisation.

According to the command spokesperson, Mr Denny Manuel Iwuchukwu, the former commandant, Obiyo, had expressed joy at having been given the opportunity to serve in such a capacity.

During the handover ceremony at the command headquarter in Enugu on Friday, Obiyo thanked the Commandant General of the Corps, Mohammadu Gana Abdulahi, for his benevolence and fatherly guild throughout his tenure in office.
He also thanked the Government and people of Enugu State for their support that made his stay in Enugu memorable.

The former commandant also appreciated the Officers and Men of the Command for assisting him to succeed and charged them to extend the same hand of fellowship to his successor.

Responding, new commandant Ezenyimulu thanked God for a chance to prove himself and promised a rapid transformation of the command.

He called on the Officers and Men of the Command to be prepared to work, pledging that ‘there shall be no dull moment.’

He said that the Corps had proved itself to be a dependable partner in the security architecture of the State.

Ezenyimulu promised to continue from where Obiyo stopped to keep the flag of the Corps flying higher in the State.

He called for information from members of the public on activities of criminals in the State, assuring that the State will remain secured.