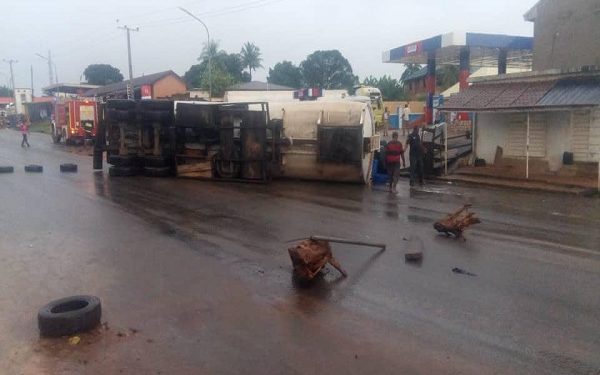 The tanker carrying 45,000 litres reportedly fell in front of a gas filling station in the area.

According to eyewitnesses, the crash was as a result of loss of control of the truck in the process of entering the filling station to offload the petroleum product.

He said: ‘A lone minor crash involving a petroleum laden Mack tanker belonging to Ecclesia Oil & Gas Ltd without a registration number was recorded at Agulere junction along Otuocha road.’

‘FRSC rescue team from Nteje unit Command were on ground to ensure free flow of traffic while the product was transloaded.’

‘Also on ground were men of the NPF, FRSC, Army an Fire Service spraying chemicals to neutralise the effect of inflammable content of the truck.’

‘However, the truck driver, Mr. Okoro John who was the only one on board came out unhurt.’

‘With the mixture of water and chemical foam compound, we were are able to control it to a standstill and there was no fire outbreak. There was no loss of life,’ he said.