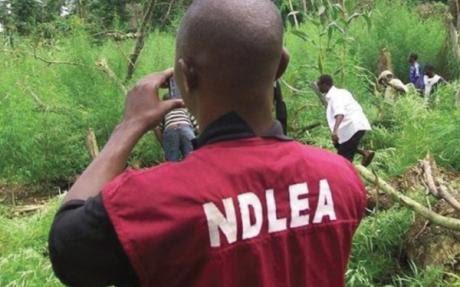 The suspects who hid the drugs in-between goods loaded in a trailer which was heading to Yobe were intercepted by the NDLEA operatives at Amawbia Junction along the Enugu – Onitsha Expressway.

Commander of the agency in the state, Mr. Mohammed Idris, while briefing newsmen at the agency’s office in Awka, said that the illicit drugs weighing about 2,000 kilograms were intercepted following intelligence reports.

He listed marijuana, tramadol, diazepam, cocaine and others as some of the hard drugs recovered from the suspects by the law enforcement agents.

Idris said: ‘We are doing everything within our powers to make sure we rid the country and Anambra State of drug trafficking menace. We are working to stop the influx of illicit drugs into Anambra State.’

‘We had a powerful intelligence that there was a vehicle loaded with some items. Inside the truck there was a concealment of drugs such as cannabis sativa.’

‘We intercepted the vehicle at Amawbia Junction, Awka and brought it to our office. The truck contained palm oil and other household items used to cover the drugs.’

The NDLEA commander, who revealed that the total kilogram of the drugs was 1,910.1010, said that the matter was still being investigated to ascertain the source of the hard drugs after which the suspects would be brought to book.