The Disregard For Chieftancy Titles In Igbo Land 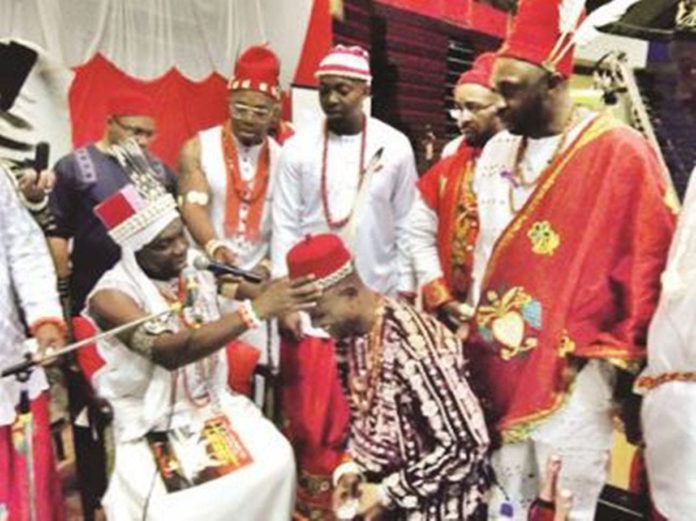 In Igbo land, chieftaincy titles are conferred only on illustrious men and women who have distinguished themselves in one thing or the other.

Some of them through their philanthropic disposition built roads, schools, churches, industries, markets, instituted scholarships to the people and other commendable and developmental projects/activities.

Recognising excellence and selfless contributions to the development of the land is part and parcel of Igbo culture. In the past, people who are experts in various endeavours receive chieftaincy titles according to what they do best; be them big time yam farmers, wrestlers, warriors and in modern time, philanthropists of all sorts.

In some parts of Igbo land, women who have excelled in different aspects of life also receive titles from either their community of birth or of marriage. Taking a female chieftaincy title in Igbo land used to be a practice exclusively reserved for wealthy, married, and elderly women. But these days, age is no longer a criteria as younger women with sound education, success in politics or business, and high corporate achievements are allowed to take up female chieftaincy titles.

At such a meeting, the aspirant for the female chieftaincy title will take charge of providing and assortment of drinks for refreshment. After this initial meeting, the aspirant will sponsor a second meeting, and provide more items – tubers of yam, bags of salt, drinks, etc for distribution to members of the league of female chiefs. The reason for the stringent screening and presentation of gift items before a woman can take up a female chieftaincy title in Igbo land is to ensure she has the financial and material means to cater for other less privileged women, children and orphans when times become hard in the community.

If any female aspirant can prove herself worthy of this high calling, she can then be given the right to take up a female chieftaincy title in her husband’s community. This implies she will receive the right to assume a new name that fits her nature and how she wants the community to perceive her.

Afterwards, private activities are performed by the aspirant and other female chiefs before she is publicly presented to the public through a formal ceremony.

During the formal presentation of the new female chief to the public, she is expected to perform a majestic dance in public twice, with other female chiefs of the community who received portions of the gift she brought to their league singing and dancing behind her to show their support and solidarity.

Who sponsors the public presentation ceremony? It is the new female chief that does so.

From that day of the public presentation, the new female chieftaincy title holder in Igbo land is expected to support, help, and promote the efforts of the male chiefs towards ensuring the survival and progress of their community.

Then, chieftaincy titles had value and respect. They were not common because they were not gotten easily.

Some of them include:

Onwa na etiri owa – man of the people, a philanthropist.

Aka ji mba – the people’s livewire.

But today, the situation has changed for bad. Chieftaincy titles no longer carry weight; they have lost their respect and value as they are purchased from traditional rulers, some at ridiculous prices.

Monarchs now dish titles out to even men of questionable characters, including known fraudsters, just because they have the money to throw around. Today, the once prestigious titles meant for men of good heart and goodwill have been bastardised and almost made worthless. One very prominent example is the Chieftancy title ‘Enyioma 1 of Ebonyi and Ochioha Ndi Igbo 1’ given to President Muhammadu Buhari during his visit to Ebonyi State while campaigning in 2015.

It has become a common sight nowadays, especially in cities within and outside the Igbo land, to see men without traditional titles wearing “red caps’’ meant for chiefs.

While some of these men wear the ‘red cap’ out of sheer ignorance; others wear the cap out of utter mischief, deceptively parading themselves as chiefs.

Nevertheless, a handful of the cap wearers, indeed, deserve to wear ‘red caps’, as they are titled men and chiefs who are recognised in their various communities as ‘Ozos’, ‘Nzes’, ‘Ichies’, ‘Ogbuefis’ and so on.

By most accounts, the ‘red cap’ in Igbo land is a symbol of authority, culture and tradition; and it represents the chieftaincy institution, its power, and authority. It is synonymous with those recognized Chiefs who have met certain required standards in their communities. These sets of Chiefs do not tells lies because they have taken an oath ‘Isa ile’ (washing of tongue ) to always say and abide by the truth hence they do not go back on their words.

The categories of chiefs who are permitted to wear this sacred cap must have met certain standards which they still maintain in their respective communities.

For instance, they are not expected to lie, swindle or engage in any activity that can bring the traditional institution into disrepute. The number of eagle feathers on the ‘red cap’, as the case may be, illustrates the status of the cap wearer. In some communities in Igbo land, an Ozo titled man whose father is still alive does not put on a red cap.

The red Cap is a symbol of authority, of culture and of tradition of the Igbo people. It represents the institution of Chieftaincy, of power and of leadership. This is why it is used as a logo in any thing that portrays the Igbo man.

But what is happening today is very unpleasant, uncomplimentary and an unfortunate bastardisation of the Igbo tradition and its institutions.

Outside Igbo land especially the big cities of Abuja, Lagos, Kano, Kaduna just to mention a few, even in the Diaspora, there are many fake Chiefs, Nzes, Ichies, and Ogbuefis all of who parade themselves in red, claiming/answering chieftaincy titles that were not bestowed on them not even to their forefathers.

One can understand when in a drama show or in a cultural festival red caps are worn by ordinary people to depict and promote Igbo culture. But definitely not when people wear red caps about and lay claims to such title and outfits they are not authorized to.

Ironically those who were bestowed with authentic chieftaincy titles are even ‘ashamed’, reluctant or refuse to put on their befitting outfits which symbolise their status in Igbo culture and helps to promote Igbo tradition. Perhaps it is because the right people refuse to wear what belongs to them that have encouraged the wrong people to step into shoes that are not theirs.

As a matter of principle and tradition, Chieftaincy title is awarded to certain indigenes in recognition of their contributions to their kinsmen, villages or communities and those who have distinguished themselves. The traditional ruler of the town or warrant chief as the case was during the colonial days award these title.

Unfortunately, Christianity adulterated this institution a great deal. Traditional Religion has longs been in existence in Igbo land. It is as old as the history and origin of the Igbo. Igbo ancestors had a traditional mode of worshiping God. Hence they have Chukwu, (Supreme Being and Creator), Eze Mmuo (High priest) and so on.

Traditionally Igbos recognised the Supreme Being and intercession hence they believe that the dead are very close to God. While offering prayers therefore the Igbos call on their dead fathers to intercede just as the Christian religion believes in the Trinity.

Overzealous Christian fanatics because they could read one alphabet or the other in the bible went outside the teachings of the Religion to create the problems which Igbo culture and traditional religion are encountering today. And if this is not checked, the Igbo nation will become a tribe without culture and tradition and the generations to come will not forgive the present generation.

In culture and tradition practicing communities of Igboland, the number of feathers one attaches to this long Red Cap indicates the level he has attained in the ‘Ozo’ institution. An Ozo person who is not qualified to wear Red Cap is recognised with his anklet and ‘Oji’ with an eagle feather on it. So it was in those days even up to the seventies (1970’s) before the craze about red and black cap began and the consequent abuse of the age long tradition of the Igbo people.

Each community should therefore start a crusade on this issue setting up standards for award of Chieftaincy titles and making sure that people’s source of income/ wealth etc should be investigated so also their influence in the society viz-a-viz societal reputation.

The Communities which originally did not have the culture of wearing red caps should borrow a leaf from Onitsha where Chieftaincy title is not for sale. In Onitsha, the ‘Ozo/ ‘Ichie’ title is held in very high esteem and they have continued to respect this age long tradition.

All the communities that claim originality of the Ozo title and red cap traditions should make sure that their Chieftaincies are not for sale and that great respect is accorded the use of red cap. They need to review certain criteria used in conferring Ozo titles making sure that one must become an Ogbuefi before putting on a Red cap. All the Nris, the Eris, the Aros, the Abribas etc should as well ensure that their age long tradition is not arbitrarily abused. Other communities now borrowing the system of Ozo title, together with the use of Red Caps or the woven Aro cap should put an end to this abuse.

The Igbos, therefore, should, as a matter of fact, imitate the late Owelle of Onitsha, Dr Nnamdi Azikiwe, the late Mazi Mbonu Ojike, Late Chief C.C. Onoh, Ebitu Ukiwe, Dr Ngozi Okonjo Iweala, Chimamanda Adichie, etc who were/are proud to appear in their Igbo traditional outfits. It is by so doing that one can project the Igbo identity, the Igbo culture, and the Igbo tradition to the outside world. The Igbo culture is too vital to be ruined and forgotten by a few bad eggs trying to twist customs and traditions.

Kola nut is not only known for it’s origin to many American and European soft-drinks as well as it’s chewing by labourers to diminish...
Read more
Editorial

In the past, it was not fashionable in Igbo land to send girls to school. The kitchen was rather seen as the best place...
Read more
- Advertisment -