Abia Poly: Details Of Summit On Repositioning Of Institution 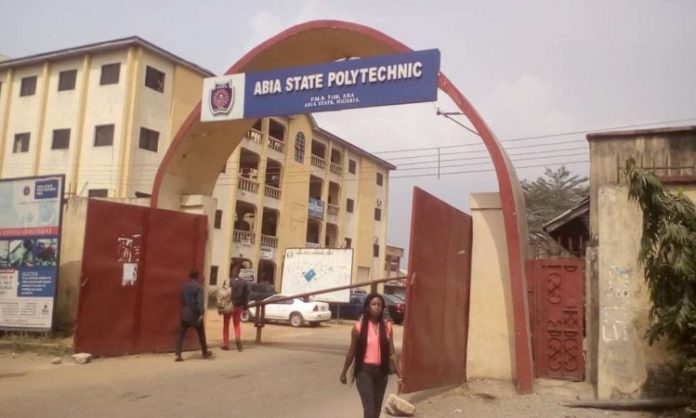 COMMUNIQUÉ ISSUED THIS 22ND DAY OF SEPTEMBER, 2020 AT THE END OF A THREE – DAY MINI SUMMIT ON REPOSITIONING THE ABIA STATE POLYTECHNIC ABA ORGANIZED BY THE ABIA STATE GOVERNMENT AT HOTEL DU GOLF ABA, ABIA STATE FROM SEPTEMBER 20 TO SEPTEMBER 22, 2020.

Following the discussions and interactions, therefore, we the participants at the plenary adopt the following resolutions:

1. That all stakeholders must join hands to ensure that Abia State Polytechnic is repositioned and refocused to produce middle and high level manpower in the areas of Science, Technical, Vocational and Management Technology.

2. That the Governing Council and Management be given reasonable period of six months from October, 2020 to stabilize and commence defraying backlog of salaries and pensions within the period.

2.1. Within 2 weeks the workers should be paid at least one month out of the arears.

3. That the Governing Council and the Management commit to the payment of salaries and pensions as they fall due, commencing from October, 2020.

4. That the Governing Council and Management take a look at overhead costs in the Polytechnic with a view to plugging all financial leakages and cutting off all unnecessary and unwarranted expenditure.

5. That the Governing Council and Management embark on a staff audit, a physical enumeration of all staff, with a view to ascertaining their number.

6. That the Governing Council and Management of Abia Polytechnic should review the placement of staff to ensure that all staff who are occupying positions beyond their academic qualifications are properly placed.

7. That the Abia State Government should constitute and inaugurate a Visitation Panel to the Abia State Polytechnic every five (5) years to ascertain that the institution is on track in respect of its core objectives and responsibilities towards staff, students and the host community.

8. That the union commits to industrial peace and no strike action within the six months with regard to the issues in this communique.

9. That a standing Dispute Resolution and Monitoring Mechanism be put in place to ensure smooth and harmonious industrial relations.

11. That there should be a forensic probe of the application of the N2 billion injected into the Polytechnic by Abia State Government with a view to determining how the funds were utilized and bring to book those found culpable.

12. That Government is to ensure the prompt release of subventions due to the Polytechnic from October, 2020 to support the current salary payments.

13. That the Governing Council and Management should immediately take steps to realize the full accreditation of programmes in the Polytechnic.

14. That the Governing Council and Management should as a matter of urgency organize Convocation ceremony for the Polytechnic within the shortest possible time.

15. That the Governing Council and Management should review the recent staff rationalization in the school within six months.

16. The summit proposed the review of the Law establishing the Institution.

17. In the next six months the summit shall reconvene to assess the progress made with regard to these resolutions.

The Governor of Ebonyi State, David Umahi has ordered banks, filling stations and other public and private facilities who closed as a result of...
Read more

Following a viral video on social media, threatening Igbos to vacate the South-West zone of the country, the Governor of Ondo State, Oluwarotimi Akeredolu...
Read more

Anambra State governor, Chief Willie Obiano has ordered the reopening of markets in the state. The Commissioner for Trade and Commerce, Mr Uchenna Okafor, in...
Read more

Gov Umahi Reiterates Safety Of Other Ethnic Groups In Igboland

The Chairman of the South-East Governors’ Forum and Ebonyi State Governor, David Umahi, has assured Nigerians from other ethnic groups of their safety in...
Read more
Load more