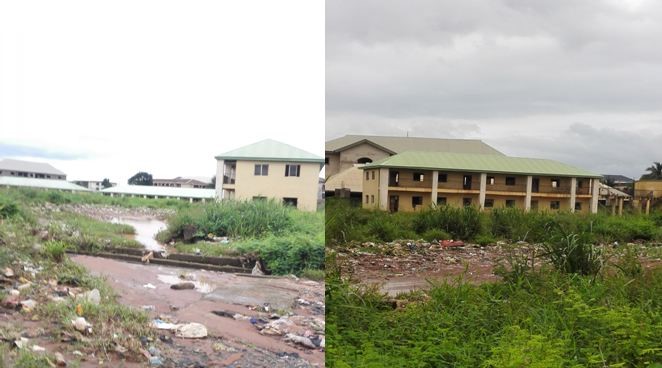 Orlu road is one of the most popular areas in Owerri, Imo State capital. One would expect that such an area will have the best of schools but the sheer negligence of the Uzodinma-led Government towards the only Government school in the area would make one wonder what the Imo state Government’s motives are.

The school has been overridden by very long grasses and is now a bowl of water due to the sloppy Amakohia-Orlru waterlogged region. This has also been like this before the COVID-19 lockdown, though its a bit worse now.  There have been a lot of petitions to the Hope Uzodinma-led Government to fix the state of the school since his assumption as Governor in January which has all gone unanswered.

As schools gradually resume after the COVID-19 lockdown, pupils and teachers in Orlu Road Primary School, Imo State, Nigeria, are in serious danger of witnessing a health hazard or environmental disaster.

This school has actually been this terrible even before the COVID-19 lockdown began months back. The buildings are obviously weak and the environment is a health disaster to the children in this school. Primary six pupils are already preparing for their common entrance examination though the state government has not yet announced the resumption date for schools in the state, as at the time of filing this report.

The Eastern Updates also gathered that pupils of the school have already been told to start cleaning the classrooms despite the terrible condition of the school structure. This is pathetic for primary education in Nigeria, especially in Imo State.