Home Editorial The Long, Thorny Road To Restructuring In The Southeast
Editorial

The Long, Thorny Road To Restructuring In The Southeast 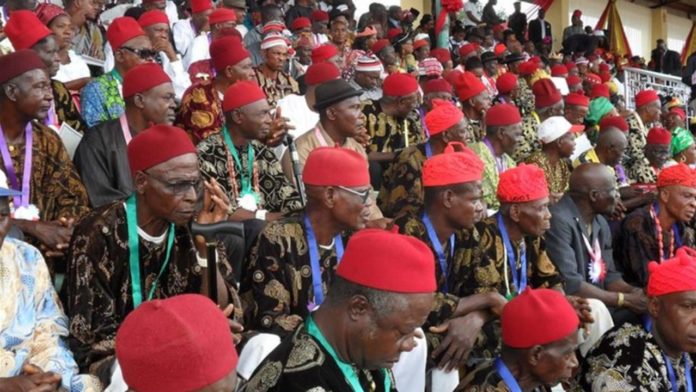 Just recently, the Governors of the southeast and many other political leaders in the region including the Ohanaeze Ndigbo met in Enugu where they discussed a myriad of problems confronting the Igbos including security and economic issues.

They feared southeast could be under siege following the recent movement of youths from the northern states despite the Covid-19 pandemic lock-down.

The meeting, however, ended with a loud silence on politics of 2023 and the topic of Restructuring.

Although Buhari has spent only a year into his second term in office, the issues of 2023 are already creeping up in the polity. Subtle campaigns for 2023 Presidency have begun and the agitation for the Presidency to move to the south has begun.

Read Also: Toss Of A Coin: Biafraexit Or The Restructuring Of Nigeria

Indeed, the controversy over which region should produce the next president in 2023 is already an issue and every zone of the country seems to have an interest in the issue.

The north plans to keep the Presidency after the two terms of President Muhammadu Buhari. While Asiwaju Bola Ahmed Tinubu, the leader of the All Progressives Congress (APC), is gearing up with some people saying that he has an alliance with the ruling APC for power to return to the west through him in 2023. There are also Prof Yemi Osinbajo, the current Vice-President; Ekiti State Governor, Kayode Fayemi, and former Ogun State Governor, Senator Ibikunle Amosun who are among those touted to have interests in the highest office in the country.

The South-south also seems to be interested in the position, on the premise that its son, Jonathan, was not given the opportunity to serve for two terms like others.

The Southeast zone, the only zone in the southern region that is yet to produce a President should be eyeing the position but it seems lacklustre about it and has not made necessary moves to push for restructuring that would benefit them.

Whenever the issue of the Presidency of Igbo extraction comes up, it becomes difficult to decide whether the southeast wants Igbo Presidency, restructuring or Biafra even though restructuring seems to be the best option for the Southeast region at this point in the Nigerian polity.

Known for their individualism, most political leaders in the southeast which include former Governor, Owelle Rochas Okorocha, Governor Hope Uzodinma, Governor Okezie Ikpeazu of Abia state, Orji Uzor Kalu, Rotimi Amaechi and many other prominent Igbo politicians are driven by selfish tendencies and this has affected the people over the years.

Restructuring cannot be realised when the people are not united and cannot speak with one voice and on top of it, they are perceived to play bad politics.

Apart from former Anambra governor, Mr Peter Obi who genuinely and selflessly fight for the Igbo cause and Senator Enyinnaya Abaribe, many other politicians seem to have nothing to write home about. Politicians of the APC appear to be under the delusion that after Buhari would have completed his tenure in 2023, power would be handed over to the Igbo. But that is not the way politics is played in Nigeria or anywhere else.

The people seem to be groping in the dark since the return to democracy in 1999. Some believe that Dr Alex Ekwueme was betrayed at the PDP Jos convention when Dr. Olusegun Obasanjo was brought out of prison and imposed as PDP’s Presidential candidate. Others believe that it was akin to what they did to Dr Nnamdi Azikiwe in the first republic when after he won an election in Lagos, the table suddenly turned and he was betrayed overnight.

Aside the great Dr Azikiwe and Dr Alex Ekwueme, the present crop of Igbo political leaders appear weak and lacking in what it takes to negotiate profitably for their people and the sole reason for this is that most of these leaders clearly seek selfish interests.

It should be recalled that before Buhari won a second term in office, a powerful delegation of Igbo APC leaders led by  Ogbonnaya Onu, Minister of Science and Technology had endorsed him for another term in office. They said the President did enough to merit a second term.

That delegation comprised former Deputy Governor of Imo State, Eze Madumere, who represented Rochas Okorocha before the duo fell out; serving members of APC in the last National Assembly, former governors, the former ministers from the southeast, members of the then national working committee and national executive committee of the APC.

They had endorsed Buhari without negotiating the terms of endorsement. Many tagged them naive. There was no question of what Buhari would do for Ndigbo during his second term. The delegation was happy that the President received them.

Since 1999, the southeast has been all out for the PDP. It supported former President Jonathan to the moon and back in 2015 but Jonathan lost the election. The southeast also lost. Then the ‘Pharaoh’ who did not know ‘Joseph’ came into power and the fate of the southeast deteriorated from playing third and fourth fiddle to playing no fiddle at all.

This in turn made the Southeast to be left out in the scheme of things. Using recent examples, the Presidential request for an approval of the Senate for a loan of 22.7 billion dollars from China’s Exim bank recently received the nod of the upper legislative chamber. The loan, according to President Buhari, would be invested in the improvement of infrastructure in the country.

He said the loan was to “ensure the prompt implementation of projects under the borrowing plan with specific emphasis on infrastructure, agriculture, health, education, water supply, growth and employment generation, poverty reduction through social safety nets programmes, governance and financial management reforms among others.

Details of the loan, when they were made public, revealed that the Southeast zone was excluded from the projects it is intended for. None of the projects captured in the loan for execution when it is eventually received falls within the zone, just as other zones will enjoy a measure of succour from it.

Railways were mapped out across states in Nigeria and the Southeast got none.

No projects have been cited in Igboland to create jobs. No developmental programmes have been considered for the South East. The slow pace of work on the 2nd Niger Bridge shows tha it might be used for another campaign in 2023.

The Southeast has never been given any position of consequence in the present administration. In the past, it used to be Hausa, Yoruba, Igbo but now, its Hausa, Yoruba, South-South, then Igbo. Now, everybody denigrates, disregards and talks down on the Igbo and freely threatens them.  They have slipped from being one of Nigeria’s largest and significant ethnic groups.

Igbos need restructuring, the Southeast region deserves restructuring more than anything at the moment. If only the leaders would rise up with one voice and let go of ‘Politics of the belly’, that is when the voice of the Igbos can be heard once more.