Home Editorial Toss Of A Coin: Biafraexit Or The Restructuring Of Nigeria
Editorial

Toss Of A Coin: Biafraexit Or The Restructuring Of Nigeria 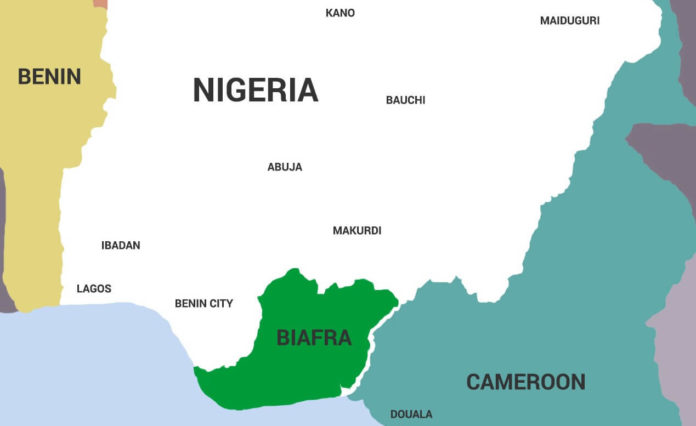 The quest for a Nigerian President of Igbo and South-East extraction has recently been gaining maximum traction across regional, ethnic, religious and political divides thanks to the numerous articles and positive propaganda portrayals. The show of good faith by prominent politicians, elder statesmen, and ordinary Nigerians alike, rekindles the hope that a greater and more equitable Nigeria is feasible in our lifetime.

In January this year, elder statesman and political veteran, Alhaji Tanko Yakasai, said: “Nigeria had three major blocks. Two of these three, namely, the North and the West have had the opportunity of producing the President. Therefore, the Igbo have a good argument because out of the three siblings, two have already succeeded at producing the President, but the Igbo have not.

“I for one, I am in support of it. I did it before in the era of NPN (National Party of Nigeria) when we had the arrangement that the next president after late President Shehu Shagari would come from the East. We would have settled this problem long ago if not for the military intervention.”

Only last Tuesday, August 4, 2020, Yakasai was on the Arise TV where he also reiterated that it was the turn of Ndigbo. The elder statesman, however, warned against the Biafra agitation and polemics of a faction of the Indigenous People of Biafra (IPOB) led by Mazi Nnamdi Kanu, which he said was destroying the Igbo cause.

“I want to say that our compatriots from the South-East should wake up and realise that Nnamdi Kanu will not be the type of people, who will take the Presidency to the South East.” He reasoned that Ndigbo must appeal to, not insult their sensibilities, to have their trust.

While Pa Yakasai and several others have been quite mature and responsible in putting their concerns across, there are many, who are so illogical and insensitive in aggressively pushing the narrative that Ndigbo cannot be asking for the presidency and Biafra at the same time.

Some even equate Igbo presidency to the breakup of Nigeria. This is as untrue as it is blackmailing. It is a gross misrepresentation of the thinking of Ndigbo.

Although Nnamdi Kanu and his disciples might be more vociferous and aggressive in marketing their belief, they do not represent the greater number of Ndigbo and Igbo intelligentsia, which is captured in the “Awka Declaration” in May 2018.

That summit was attended by both the ordinary men and the creme d l’creme of Igbo leadership, including the President General of Ohanaeze Ndigbo, Chief Nnia Nwodo; Deputy President of the senate and highest Igbo political office holder at the time, Senator Ike Ekweremadu.

Presenting a 10-point demand of Ndigbo, Soludo explained that the positions presented for adoption by the 100-man committee were distilled from accumulated years of work on the subject by successive administrations of Ohanaeze Ndigbo, submissions of the Igbo Leaders of Thought for the 2014 National Conference, 1994 constitutional conference and 2005 and 2014 national conferences.

Included was the report of the committee set up by Southeast governors on the review of the 1999 Constitution as well as the submissions/works of various Igbo groups/think-tanks like the Igbo Renaissance Centre Uturu, Aka Ikenga, Izu Umunna; Nzuko Umunna; Igbo intelligentsia, World Igbo Congress, and reports of various meetings and conferences of Igbo stakeholders and leaders, plus the outcomes of the town hall-styled consultative meetings by The Ohanaeze Planning and Strategy Committee and the Organising Committee for the Summit on Restructuring in Lagos, Abuja, and Enugu.

In the 10-point Awka Declaration, Ndigbo demanded resource control, regional government based on the six existing geo-political zones, fiscal federalism, devolution of power, additional state for the Southeast before further creation of states, rotational presidency, a six-year single term with six Vice-Presidents, among others.

Ndigbo also declared: “The position of Ndigbo is to seek a transformed Nigeria that works for every Nigerian citizen, a level playing field for all Nigerians to enjoy freedom, liberty, fairness, equity and justice to maximise their fullest potential. Ndi Igbo are uniquely positioned, by virtue of their huge stake in Nigeria, to join hands with every willing party to champion a pan-Nigeria agenda. We do not seek any preferential or differential treatment from Nigeria.”

“Ndigbo wants a Nigeria that works to maximize their security, prosperity, and happiness. Igbo also want a Nigeria that allows every part of Nigeria the latitude and opportunity to develop at their own pace. We want a national conversation to create a new and better Nigeria for all Nigerians.”

It is equally recalled that Igbo political, traditional and socio-cultural leadership met at Nike Lake Resort Hotel, Enugu, on July 1, 2017, at the height of the IPOB agitation that left the region tense.

In a seven-point communiqué read by Governor Dave Umahi of Ebonyi State, they voted for restructuring, adding that “Ndigbo are in support of a united Nigeria, where peace, love, fairness, justice, equity and equality of opportunity are paramount, regardless of creed, ethnicity, gender or political affiliation”.

The formwork of that resolution, we were later made to understand, was a position paper by Senator Ekweremadu entitled, “Biafra: The Legal, Political, Economic, and Social Questions”.

In that treatise, which was later widely published, Ekweremadu embarked on a realistic, holistic, historic, and dissection of the pros and cons of secession, concluding that “Ndigbo will thrive, probably more than other regions, under a federal structure that guarantees substantial autonomy, justice, equity, security, and prosperity for Ndigbo wherever they live”.

Indeed, it is for their support for a united but restructured Nigeria, over secession that the Igbo political leaders have become targets of physical assaults, threats, lies, and propaganda by IPOB  separatists.

But both want justice for Ndigbo, however, through different routes.

Instructively, Ezeigbo Gburugburu, Dim Odumegwu Ojukwu, was unequivocal about his stand on the future of Ndigbo in Nigeria.

Delivering the 2nd “The Sunday Newspaper” (TSM) Diamond Lecture in Lagos on February 22, 1994, Ikemba said: “I do not deny the fact of secession in 1967. This is a historical fact. What I deny is that the Igbo community to which I belong has been planning for secession. Secession is not like cocaine, it is not addictive. Today, I have more reasons to seek a better Nigeria”.

Quoting the good book, there is a saying that goes “Where a man’s treasure is, there also lies his heart”.

No part of Nigeria rivals Ndigbo in the number of their people or the quantum of their investments outside their ancestral lands. It is only the Igbo man that goes to Kaura Namoda village and develops it like his home.

Until recently, the road linking Gudu Market and Lokogoma in Abuja was impassable and abandoned by FCT authorities. Once an Igbo business, Ebeano Supermarket, came to the area, they constructed it last year. Igbo are actually the number one true Nigerians, for a people bent on secession would not be investing their lives outside Igboland. Those saying that they are uncomfortable with the idea of Igbo presidency are simply uncharitable.

It is also noteworthy that pro-Biafra agitations have been loudest under President Muhammadu Buhari, because of his leadership style, which is excluding Ndigbo and asphyxiating their legitimate aspirations. Many also argue that Nnamdi Kanu was a nobody before Buhari’s advent, which made him a “hero” out of him through unnecessary incarceration, trial and discriminatory policies against Ndigbo.

To make the matter worse, Buhari’s administration proscribed the unarmed organisation as a terrorist group while saying nothing about the armed Fulani herdsmen ravaging the country.

Meanwhile, it is unfair to profile or mischaracterise Ndigbo based on Biafra agitations and IPOB’s activities.

Boko Haram and ISWAP have not hidden their intension to carve out an Islamic state in Nigeria. They control territories in the North East and even appoint “Governors” who administer them and collect taxes. But that didn’t disqualify Atiku Abubakar or the North-East from vying for the presidency. Bandits and some criminal herdsmen have been sacking and plundering villages in the North West and across the country. Did that disqualify Buhari or translate to a northern narrative?

The Niger Delta region produced Goodluck Jonathan despite blowing up pipelines and engaging in economic sabotage to press home their quest for justice. The activities and antecedents of the Odua Peoples Congress (OPC) are well known. Yet the South West has produced Olusegun Obasanjo and Yemi Osinbajo, while OPC leader, Gani Adams, was appointed the Are-Ona-Kakanfo (Generalissimo) of Yorubaland.

So, why should IPOB be the yardstick to measure Igbo patriotism and suitability for the presidency?

This is the staunch reason why many agree with the Governor of Enugu State and National Chairman of the Peoples Democratic Party (PDP), Dr Okwesilieze Nwodo, that denying Ndigbo the presidency come 2023 is what could actually trigger an organic BiafraExit, not their election as president

Denying them the opportunity will make it clear that Ndigbo are unwanted and the political elites might have no option than succumb to the Biafra agitation. Otherwise, what will they go home to tell their people again? Ndigbo have paid their dues in Nigeria and have what it takes to turn the country around. They merit the support of the rest of Nigeria to produce the next President of Nigeria and end the lingering feeling of the Nigeria-Biafra civil war, restore national unity and move Nigeria forward.