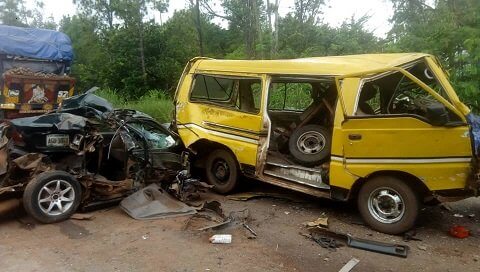 The accident which occurred around 9.50 am near a river involved five vehicles with thirteen persons on board.

The Nation gathered that the incident was caused by excessive speeding leading to loss of control of the Mitsubishi L300 bus which resulted in secondary crashes of other vehicles.

“The crash which was caused by excessive involved a total of Thirteen(13) people (10) male adults, (3 )female adults and (7) male adults, (3) female adults who sustained varying degrees of injury and were rushed to Mayor hospital Nnobi by FRSC rescue team from Nnewi Unit Command while obstruction is being cleared.

“The Sector Commander, Andrew Kumapayi while wishing the incurred victims quick recovery admonishes motorists to adhere strictly to stipulated speed limits and always give consideration to other road users.”