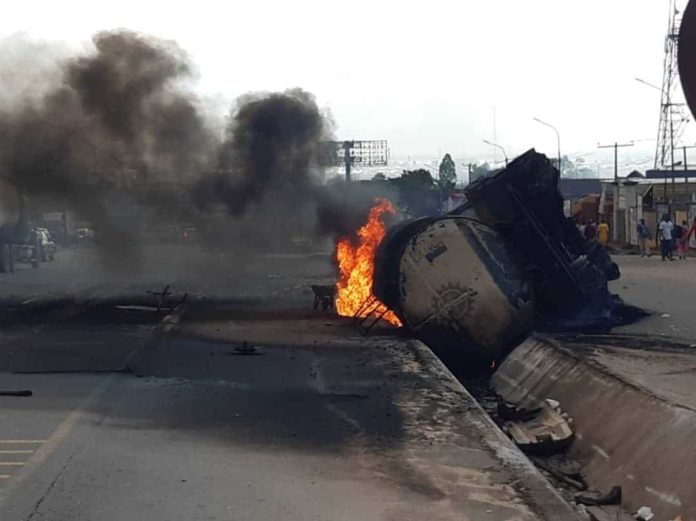 Fire explosion was on Friday averted in Awka, Anambra state when a fully loaded diesel tanker fell along the Onitsha-Enugu expressway.

The accident which occurred around 10am involved a Mercedes Benz truck with the driver and two passengers on board.

The Eastern updates gathered that the truck heading to Enugu from Onitsha axis fell down at the Agu-Awka junction following loss of control.

Residents of the area were seen scooping the content which spread through the drainage along the highway.

He said the driver and his two conductors sustained varying degrees of injury and were taken to the hospital for medical attention.

He said, “It’s quite glaring that the driver has been going on a speed more than required. Besides, it’s possible that fatigue set in which led to loss of control and the tanker fell.

“He was coming from Onitsha axis, and out of indecision, he suddenly turned right. I want to believe he’s coming from a far journey and didn’t rest. Thank God no life was lost. But the driver and his boys were seriously injured.

“We had to cordon off the entire area to avert any fire outbreak. We later opened up the road to allow free flow of traffic after the fire service had neutralized the inflammable content.”

The State Fire Chief, Engr. Martin Agbili said the quick response of his men averted what could have led to fire explosion.

He said, “At 10am, we received a distress call that a truck loaded carrying diesel fell along the express close to our office and immediately dispatched our men to extinguish it with five of our fire trucks.

“Thank God it has not started burning before our men and other sister agencies arrived because the content spread to other places. Besides the number of vehicles passing the express makes the situation more risky.”