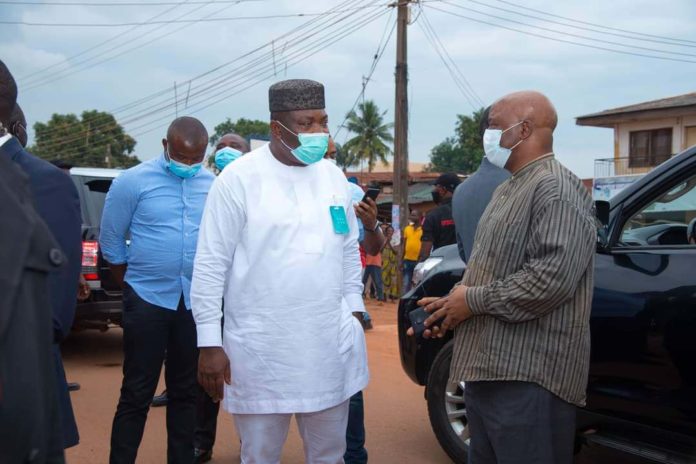 The recent clash in Enugu between members of Indigenous People of Biafra (IPOB) and personnel of security agencies, coupled with some minor security issues, which claimed lives on both sides and led to the carting away of some security arms, is needless and avoidable. Unfortunately, some people, especially politicians, who before now have no sympathy for IPOB agitations or its members, have since jumped into the fray, trying to make a mountain out of a molehill or gain cheap popularity from the clash with their unguarded statements and emotional dispositions. These attitudes of theirs provide no clue or solution to the clash.

One of such persons, a serving lawmaker even said that he declined an invitation for the reopening of the rehabilitated Enugu airport because of the clash and loss of lives of IPOB members, forgetting that both security agencies and IPOB lost their members and personnel in the clash. What would have the lawmaker done if the security agents had launched a reprisal attack on IPOB members for daring them with their illegal activities?

Well, it is hoped that the lawmaker in question will not use the reopened Enugu airport until those IPOB members who lost their lives in the avoidable clash are brought back. Let him also forfeit his one-year allowances and salaries to the families of the deceased IPOB members. Doing so will prove his genuine love and concern for the deceased IPOB members and their families. Besides, of what effect was the lawmaker’s decline of the invitation for Enugu Airport reopening and what is the link between the reopening of the much-awaited repaired Enugu airport and the clash, if one may ask? If it is true that the IPOB members’ activities at Emene Enugu pose a security threat to the state, is not better for the security agents to lip it in the bud, before it escalates,  consumes innocent citizens and destroy the peace of the state. No responsible government or security agency tolerates or overlooks breach of security or peace, no matter the circumstances. The primary and constitutional responsibility of government is to protect lives and properties.

It is quite imperative at this point to remind those who have been grandstanding and pontificating on social media platforms of their Igboness and love for IPOB members since the clash occurred that they are not more Igbos or love IPOB members more than those who have worked and still working behind the scene to find a means of forestalling such clash again in Enugu and entire Southeast region.

This is considering the fact that many innocent, indoctrinated and uninformed Igbo youths and businessmen in the Southeast region have lost their lives, businesses and means of livelihood in the IPOB struggle with nothing meaningful to show for it for years now. Greatest losers in the struggle so far are the people of the Southeast region.

Meanwhile, the actions and inactions of those who felt they love IPOB members more than the rest of the Igbos is irritating, hypocritical and disappointing. They are just more of social media warriors than foot soldiers in the IPOB activities and agitations. They sit in the comfort of their homes to fan the embers of discord or war on social media platforms, while innocent Igbo youths are dying recklessly in the name of IPOB struggle.

But what do one expect in a society like ours, where hypocrisy is a tradition and an addiction. Should be of worry to any sensible and reasonable resident of Enugu is the real cause of the Enugu security agents / IPOB clash and its consequences on the reigning peace and security in the state. This is in the light of the fact that Enugu has never been a hotbed of IPOB activities since the commencement of its members’ agitations for actualisation of Biafra Republic. Is it not possible that the recent clash was sponsored or stage-managed by some elements to destabilise the peace of the state disguising under IPOB umbrella? Nothing is impossible. Just thinking clear and reasoning loud.  Desperate politicians can do anything to undermine the government in power, including creating crisis-ridden situations, especially in Enugu where Ugwuanyi’s administration has been applauded for providing  safe, secure and enabling environment for the residents to enjoy.  Enugu has been known for its peacefulness since Ugwuanyi assumed office. His government has worked so hard and sacrificed so much to keep Enugu peaceful and secure.  So, the recent clash between purported IPOB members and the security agents came to the residents as a surprise and source of worry. It was ill-timed, suspicious and worrisome.

This is not the time to apportion blames, but to proffer solution. The situation would have been better handled than the way it was handled that led to loss of lives and carting away of security arms.  Be that as it may be, the mistake has been made and lives have been lost. These lost lives are irreplaceable.  What is important now is how to ensure that there is no repeat of such ugly incident in the state. This could be achieved through dialogue, proper investigation and constructive engagement, not force or social media mudslinging.  This is where Ugwuanyi has stepped in with much candour and sincerity. His spontaneous visit to the scene of the clash, summoning emergence security meeting and meeting with the leadership of Ohanaeze Ndigbo to discuss the way forward, were steps in the right direction.

When the clash occurred, many may have expected Ugwuanyi to stay aloof, attack or blame IPOB or the security agencies. But unlike some political office holders, it is not in Ugwuanyi’s character to engage in blame games or hasty conclusion to gain cheap popularity or score political gain.   He is a leader that usually takes his time to look at issues, investigate and analyse them, before arriving at a conclusion and solution.

So far the steps taken by Ugwuanyi on the clash is reassuring, timely and commendable. That is vintage Ugwuanyi, a leader who hardly gives up or sleeps over issues or matters that threaten or affect the peace, wellbeing and security of Ndi Enugu.  Ugwuanyi’s sure-footed steps has doused tension generated by the clash and shown how much he valued the peace, security of lives and properties in the state.    It has also shown that Ugwuanyi’s government is capable and prepared at all times to ensure that the people of the state enjoy absolute peace and security.   So, there is no cause for alarm or need for apprehension over the clash. Just like Ugwuanyi  assured that his government will get to the root of the matter after the emergency security meeting with heads of security agencies in the state, it is believed that his government will do so.

This is because his government has in the past tackled many security issues in the state to the satisfaction and applause of the people. The recent clash will not be different.  The circumstances surrounding it would be unravelled by Ugwuanyi’s administration and resolved amicably for the good of all in the state. That is what is being expected and that is the way forward.    Meanwhile, nobody or no right thinking person should be against the IPOB’s struggle for self-determination, because just like other tribes, they are entitled to it in line with international laws and conventions.

The only problem with IPOB activities has been their members’ approach to the whole thing which has caused more harm and at the same time detrimental to the well being and development of the Southeast region. It is high time the proponents and leaders of IPOB should change strategies, go back to drawing and adopt non-violent and diplomatic approach which is in line with the global best practice. Challenging or confronting security agents in contravention of the laws, alienating the majority of Igbo intellectuals and leaders in the struggle, deploying aggressive posture and fighting all including, leaders of the Southeast region and beyond is not and cannot be a sure way to the actualisation of Biafra.