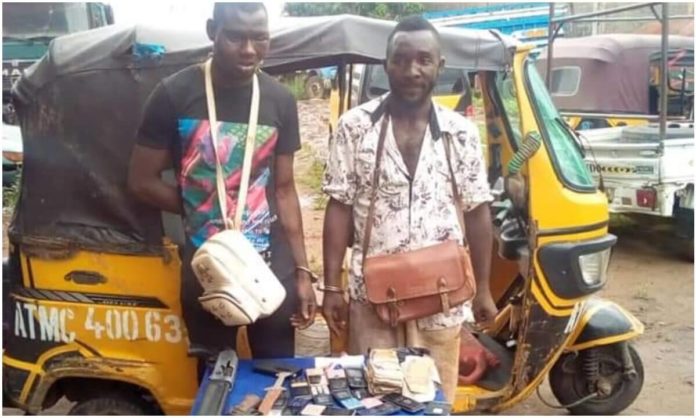 Police in Anambra State have arrested two members of an armed robbery syndicate, who specialised in ‘one-chance’ robbery operation.

The suspects, Chukwuemeka Ikechukwu, 22, lives at Chibest Street, Tarzan in Onitsha, while Tochukwu Okeke, 30, is said to be an indigene of Nkwelle Ukeh in Idemili North Local Government Area of the state. Both were arrested in Onitsha yesterday.

The state Police Command spokesperson, SP Haruna Mohammed, who disclosed the arrest of the suspects to journalists, said two guns, a tricycle, 12 handsets and a huge amount of cash among other items were found with the suspects as exhibits.

According to him, “On the September 6, 2020, at about 4:30a.m., following credible intelligence report, police operatives attached to Ogbunike Division smashed a robbery syndicate and arrested two suspects.

“The suspects were part of the gang allegedly involved in series of armed robbery and handset snatching in Ogidi, Nkpor, Tarzan, Umunya, Odumodu, tollgate axis and its environs.

“Exhibits recovered in their possession included one automatic pump action gun with breech No 12776; one English pistol, one dagger, two hand bags, 12 assorted phones; one purse containing recharge cards of various networks, one tricycle with registration number NSH 299 QH; one locked safe containing unspecified amount of money and cash sum of N296,000 all reasonably suspected to have been snatched from different victims.”

The police spokesman said the case was still under investigation, after which the suspects would be charged to court.

He added that the command is calling on members of the public whose phones and other belongings were either snatched or stolen through similar modus to report at Ogbunike division or the Command Special Anti-Robbery Squad in Akwuzu to claim them, and also give further evidence to aid police investigation.