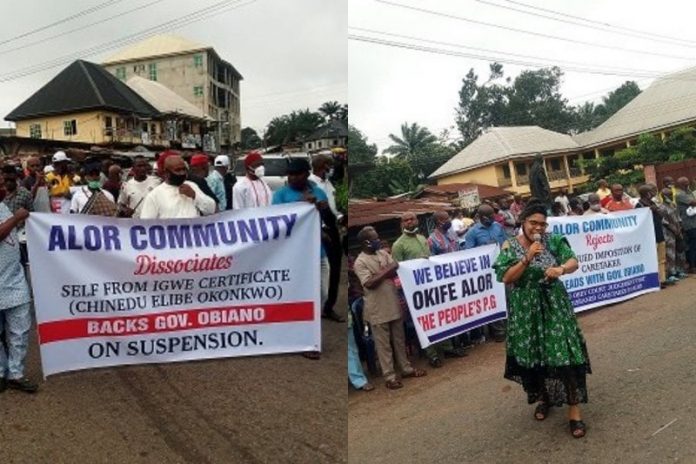 The Resident Electoral Commission, REC, in Imo State, Professor Francis Ezeonu, has denied leading or engineering any protest against any traditional ruler in Anambra State.

Ezeonu, who made the denial Monday, when he was confronted by newsmen in Owerri, to explain his alleged involvement in the reported protest against the traditional ruler of Alor community in Anambra State, said he was shocked about the report.

“I was shocked beyond description, at what I read on several platforms when my attention was drawn to the reports. I never led any protest with anybody, living or dead, against any Anambra monarch”, Professor Ezeonu said.

He, however, affirmed that he is the current Chairman of Alor Dinma Initiative, ADI, a community-based non-partisan organization that drives development in Alor town.

His words: “In that capacity, I was invited to the August 2020 Assembly of Alor people, organized by the town union government, Alor People’s Assembly, APA, on Saturday, August 29, 2020. I wish to note that I have always attended the meeting on invitation, and this is not the first time.

“Like in previous instances, the town held a formal meeting and released a communique at the end of the meeting. I am not a member of the town union executive and did not sign the communique. The communique of the meeting was officially read and signed by Chief Uzoma Igbonwa, the President of Alor People’s Assembly.

I did not lead any protest and I cannot remember seeing Dr. Chris Ngige at the said meeting, while I was there.

“As an electoral umpire, I am very conscious of the need to remain above board in matters of partisanship and I have always refrained from such.”

While saying that attending the town and village meetings remained a civic responsibility, Ezeonu, however, stressed that he was invited to the meeting as a citizen and leader of a major stakeholder organization in the town.

“I attended and participated in that capacity. I have always done so in the past. How my presence at the meeting was misunderstood and misrepresented, beats my imagination”, Professor Ezeonu said.