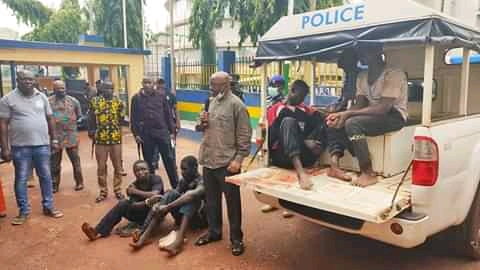 No fewer than 10 persons were killed on Sunday in Emene, in the Enugu East Local Government Area of Enugu State, when policemen, operatives of the Department of State Services and members of the Indigenous People of Biafra clashed.

The clash threw Emene and its environs into confusion and disrupted church services as worshippers ran helter-skelter to escape being caught in the crossfire.

It was gathered that trouble started around 7am when some DSS operatives and policemen stormed Practicing School Emene, where the members of IPOB were observing their Jewish prayers, and started to arrest them.

Eyewitnesses said attempt by IPOB members to resist the arrest led to the shooting, during which one IPOB members was initially killed and others injured.

It was gathered that seeing one of them in a pool of blood, other IPOB members attacked the security operatives and killed two policemen and two DSS operatives.

A reinforcement was said to have been called and over a dozen patrol vans loaded with armed security agents, comprising police, soldiers and DSS, arrived at the scene and faced the Biafran agitators, killing about five of them.

It was gathered that over 30 members of IPOB were subsequently arrested.

When one of our correspondents visited the area, sound of gunshots and teargas fumes filled the air.

One of our correspondents counted five dead bodies with one burnt beyond recognition on the road.

The police and the DSS were said to have taken the bodies of their men to the morgue.

A policeman, who spoke to our correspondent on condition of anonymity, said, “When my team arrived, the IPOB members had taken over the street and making bonfires to prevent security men from coming into the venue of their prayer.”

The commissioner, who spoke on the telephone said, “It was a DSS operation; it was when it turned bloody and IPOB seized their men that they sought our intervention.

“When my men arrived at Emene, they came under heavy fire from the miscreants. So they have to take cover and replied and when they saw that the problem was too much, they called for reinforcement, then the DSS also called the military.

“So it was an operation to rescue DSS operatives and at the end, I arrested five; then two corpses. They killed two people and they burnt one other alive.

“They killed one other person whose identity was not known. The injured are receiving treatment, including the IPOB members that we arrested.

“Maybe other members of IPOB were with DSS because they also made arrest and military also effected arrest also.”

Meanwhile, the Media and Public Secretary of IPOB, Emma Powerful, on Sunday in a statement in Anambra State said the group would avenge the killing of its members in Enugu.

The group said, “Today (Sunday), the Nigerian security personnel stormed IPOB meeting ground in Enugu and started  shooting sporadically which consumed the lives of 21 members and 47 arrested for no just cause or provocation.

“Those responsible for this barbaric killing in Enugu today must pay for their actions against IPOB at the appropriate time. It is laughable for the DSS to be claiming that they lost five personnel in the hands of unarmed and peaceful people. It is clear to all that IPOB doesn’t carry arm.”

The group warned that keeping quiet and following the rule of law should not be misconstrued as weakness on its part.

It added, “We are warning and asking the Nigerian government and its security operatives to stop this atrocity. Why have they refused to confront Fulani terrorist herdsmen, Boko Haram terrorists,  Ansaru group, Fulani bandits, ISIS and other groups ravaging the country and busy killing innocent and unarmed citizens of IPOB?”

The Department of State Services said two of its men died on Sunday when a patrol team was attacked by IPOB members.

The service did not provide details of the attack but said a comprehensive investigation had commenced into the incident.

It stated, “The DSS wishes to inform the public that its patrol team was, today (Sunday), attacked in Emene, Enugu State by members of the outlawed Indigenous People of Biafra.

“The service lost two personnel in what was clearly an unprovoked violent attack launched by IPOB on the team.”

The secret police condoled with the families of the departed officers and also prayed for the repose of their souls.

It explained that all measures had been put in place to ensure that their killers and everyone involved in the dastardly act were promptly apprehended and brought to justice.

The agency reaffirmed its commitment to work with other security agencies to maintain public safety and order.

It urged law-abiding citizens and residents to go about their normal businesses without fear.