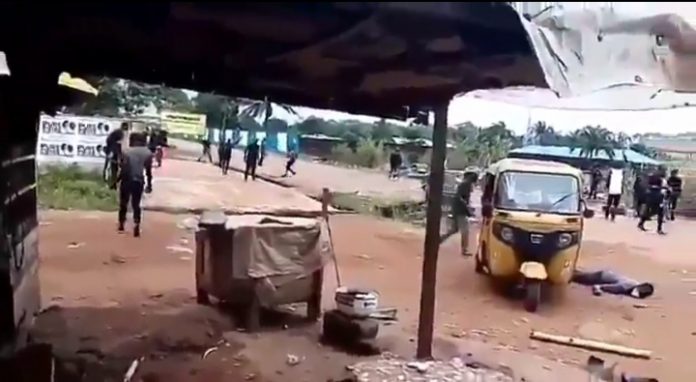 Five persons including two officials attached to the Department of State Security Service (DSS) and three members of the outlawed pro-Biafra group, Indigenes People of Biafra (IPOB), reportedly died on Sunday in Emene, Enugu following a bloody clash between members of the two groups.

Several other persons also sustained injuries while an unspecified number of IPOB members were allegedly arrested by the police while attempting to flee the area.

The Eastern Updates gathered that Emene was tense for a greater part of Sunday as police flooded the area, restricting the movement of persons and vehicles as they combed the area in search of IPOB members.

It was learnt that trouble started at about 9.00 am, when machete-wielding members of the group allegedly gathered at the St Patrick’s Community School compound, along the old Abakaliki road to conduct a “combat training for new members.”

The information about their gathering was said to have filtered to operatives of the DSS, who stormed the venue to stop the exercise from taking place.

The Biafra campaigners were said to have overpowered the DSS operatives and made it to a nearby Emene Police station, chanting solidarity songs.

A source stated that, though some of the officials of the DSS had guns they could not fire at the rampaging members of the group, “because they were not permitted to apply force on the group”.

“It was while attempting to gain entrance into the police station that about a dozen patrol vans loaded with well-armed security agents, made up of Police, Army and DSS moved into the scene and started shooting at them”, the source said.

It added that in the ensuing confrontation, sounds of gunfire and teargas fumes filled the axis between St Patrick Secondary School and St Joseph Catholic Church, stressing that some residents who were already on their way to church for the morning service could not continue for fear of being hacked.

Occupants of the area were said to have scampered to safety. The streets were vacated as the security operatives continued in their raid in the area.

One of the accounts of the incident stated that while the IPOB boys were running, the bullets fired by the security operatives caught and killed three members of the group. They were said to have fallen flat beside the gutters in the pools of their blood.

A security source said, “We lost two of our men and that is because they were not given instructions to fire at the group when they got there. When instructions came for them to defend themselves, it was already late as the two officials were already dead. They actually went on raid this morning. Those boys carried machetes and other dangerous objects to attack them.” A chieftain of the IPOB, Nzekwe Ugonna, told Newsmen  that, “We have been meeting peacefully at the venue”. Asked whether they were actually training new members on combat, he stated that, “it depends on what they mean by combat. We are peaceful and not fighting any war.”

He alleged that over 15 members of the group were arrested, adding that “we have recovered three dead bodies and many sustained injuries while trying to escape from security men” As at the time of filing the report on Sunday afternoon, Emene was still tensed as security agents flooded the area, restricting the movement of persons and vehicles as they searched for IPOB members.

Efforts to speak to the police on the development proved abortive as Police Public Relations Officer in Enugu state, Daniel Ndukwe did not respond to repeated calls on his mobile line. He did not also respond to text messages sent to him.