The Notorious Otokoto Era And The Progression Of Crime In Imo

Anyone who lived in Nigeria during the late 1990s, especially in the Eastern region would surely raise an eyebrow of recognition when the name OKOTOKO is mentioned. That was during the era of the creme d la creme big boys in town. The era of Eddy Nwagu and other well-known philanthropists whose ‘extra-curricular’ activities were exposed.

Chief Vincent Duru, alias, Otokoto who was infamous for ritual killings. His son Obidiozor Duru then was the kingpin of the notorious Black Secret Cult that was responsible for sporadic robberies and abduction of children within Owerri, Imo State.

That period was a period of heightened agaitation in Igbo land due to social class disparities. Young men flaunting hard currencies like they were cassava leaves. The young village boys who travelled to the ‘city’ with their ghana must go and came back after some years with huge imported Bentley’s and Rolls Royces with booths filled with mint naira notes ready to be wasted.

That was also the period of popular 419 heists, the period when German, American, French and Chinese Investors were usually hood winked and duped of millions of Naira. The Klaus Munch heist and the Banco Noreste fraud (the fraud heist that birthed the popular Orji Glasshouse complex) should ring a bell.

The Otokotos had been under the radar of Owerri indigenes at that time because they were under the category of the rich opressors in the society. Like the proverbial smoke that comes with a fire, the 19th of September, 1996 saw Otokoto’s incrimination. His dirty linens were washed outside, his exotic hotels, ‘Otokoto hotels’ were razed down. He was incarcerated and later executed 20 years later after indictment. 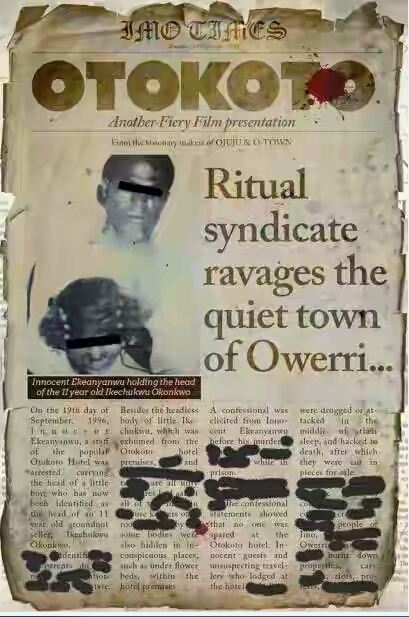 It all happened in the capital city of Owerri, Imo State on the 19th of September, 1996 when an 11-year-old innocent boy named Anthony Ikechukwu Okoronkwo was murdered for ritual.

The young boy was a groundnut hawker who frequented the streets of Owerri to sale his wares. On that fateful day, he was walking past Otokoto hotels, when a man identified as Innocent Ekeanyanwu at Otokoto hotels, aged 32, beckoned on him to come.

Unsuspectingly, the young lad excitedly went into the hotel to sell his wares and was treated like a guest. He was given a bottle of chilled Coca-Cola which he chugged down with relish. Sadly, the drink was spiked and soon, poor Ikechukwu slipped into everlasting unconsciousness.

Ekeanyanwu then carried the limp body of Ikechukwu into one of the hotel rooms and what follows after is what both the gods and human beings forbid. He decapitated the boy’s head, ripped open his abdomen, harvested his liver, and cropped off his penile tip. He selected other organs he needed and stacked them together in a polythene bag and buried his remains in a shallow grave near the hotel.

After burying the ill-fated lad, he immediately left the hotel to deliver the head to a big cat, named Chief Leonard Unaogu at Eziama, Ikeduru, near Owerri.

Blood was still oozing from the bag when he alighted which stirred the suspicion of the Okada man identified as Mr Hilary Ngọzi Opara. Ekeanyanwu could not deposit the head as Chief Unaogu had already left the town for Lagos. He had to go back to Owerri with the head.

The bikeman quickly tipped the policemen and they intercepted Ekeanyanwu on his way back to Owerri in a Peugeot 505. Hell was let loose when the news spread. The media added more fuel to the inferno as they beamed live Ekeanyanwu carrying the fresh head of little Ikechukwu.

The poeple of Owerri went berserk when they beheld the gory sight. They all trooped out in their numbers to Otokoto hotel for protest. The hotel buildings were razed down completely. They equally marched to the palatial mansion of Otokoto nearby and destroyed his expensive cars and choiced properties. The unstoppable rioters equally went round destroying other properties linked to Otokoto, even those of his friends.

Before this horrible incident, the people of Owerri (Ndi Owerre) were already very mad at the bizarre actions of some loud, extremely powerful and obscenely wealthy individuals in the state. These people were highly-connected and oppressed everyone where they went. Rumours were all over the place as to their very dark dealings and even the possibility of ritual murders and killings but no one really had any hard evidence yet or probably those who had it were too jittery to say anything. Whatever the case, these rich people who had no real tangible or easily traceable sources of wealth kept on living large and instilling an atmosphere of terror and fear on the Owerri populace. This was how Owerri was described at that time:

Luxurious commodities also became available in Owerri during the early 1990s, but mostly through a set of exclusive shops. These shops catered to members of their owners’ class: the newly affluent and generally youthful social elites of the town. Besides the arrival of aeroplanes in Owerri’s skies for the first time since Federalist bombing attacks during the late 1960s, the town’s bicycles and decrepit Peugeot 504 taxis now shared its potholed streets with the extraordinarily expensive automobiles and sports utility vehicles of the nouveaux riches.

By 1996, Ndi Owerre (Owerri indigenes) could, indeed, see what they had been missing before airport prosperity, but for most of them, this was little more than a glimpse through the ornate gates of elite mansions or into shops whose goods had price tags the equivalent of several months’ earnings. Since a number of the town’s parvenu millionaires were not ndi owerre themselves, old ideals of reciprocity between wealthy and poorer clan members did not seem to apply under the new regime. This lack of reciprocity was especially felt as the young elites took titles and demonstrated their dollar/naira power at public, ‘cultural’ events like masquerade outings, weddings and funerals. Successful business entrepreneurship in 1990s built lavish houses, and flaunted their riches in the faces of their suffering neighbours.

When the question was posed about the origins of such untoward wealth, two possibilities beyond legitimate entrepreneurship presented themselves to the Owerri imaginary. First, the money could be the ill-gotten gains of Nigeria’s emerging culture of drug couriership and weapons sales. Second, and even more frighteningly, the money could be the product of the worst type of crime: the direct exploitation of children, whether as targets for parental extortion or as targets for money magic, a practice otherwise known in Nigerian Anglophone circles as ‘ritual murder’.’

That was a description of the atmosphere of Owerri of that time. And yes, the oppression by the wealthy was real.

They flaunted their questionable wealth in the most nauseating manner, took all the chieftaincy titles, moved around with armed teams of police and soldiers harassing everyone on the roads, their cars had special and customized plates and any motorist who dared to protest got the beating of his life. These gods were virtually untouchable until everything scattered.

After arrests were made, Ekeanyanwu who was later identified as a gardener in Otokoto hotel was remanded in prison.

Surprisingly, he died four days later from food poisoning. Luckily before he died, he was able to sing to the policemen. He implicated Chief Unaogu as the mastermind behind the brutal killing of Ikechukwu. He also sang about their killing syndicate which specialised in kidnapping and harvesting of human organs for rituals.

According to him, Chief Unaogu had directed him to get the human head. He further confessed that the Otokoto and his gang had been in the business as far back as 1970’s. The guests at his hotel were not spared too. They were drugged or attacked in the middle of their sleep after which they were dismembered and their organs plucked.

The police swung quickly into action and discovered tens of shallow graves. More than 24 decomposing and dismembered bodies of human beings were exhumed. Chief Unaogu was immediately arrested but he blatantly denied knowing whom Ekeanyanwu was. He was the junior brother of Laz Unaogu, a then serving minister under General Sani Abacha.

Trial properly commenced on the 9th of December, 1996 with the Okada man, Ngọzi Hilary Opara as the first prosecution witness. Other witnesses came up which included: Ambrose Onah, a police sergeant who recorded the confessional statement of Ekeanyanwu before he was mysteriously killed, Margaret Acholonu, a receptionist in the hotel who confessed that Chief Vincent Duru was actually in the hotel the day poor Ikechukwu was beheaded.

Another police sergeant, Sunday Onwuchekwa told the court that Ekeanyanwu had lied about the crime scene. According to Onwuchekwa, Ekeanyanwu had told them he executed poor Ikechukwu and dumped his dead body inside Mba River near Owerri just to mask the actual crime scene. The police was deceived at first with the false trail before information reached them about the commotion at Otokoto hotel.

It was even reported that Chief Vincent Duru had shouted at Ekeanyanwu during the course of the investigation before he was murdered. Otokoto screamed at him in Igbo, ‘I mebo la m?’ meaning ‘Have you implicated me?’

The distraught mother of the poor lad, Laeticia Okoronkwo, Sulaiman Idris Ibe, the police officer on seat when Hilary Opara the Okada man came to testify, another police photographer and Ralph Nwaiwu, the doctor that performed autopsy on poor Ikechukwu all testified in court.

The case snailed on without progress for three years as there were series of adjournments, absence of presiding judges and lawyers even to the transfer and retirement of judges. There were reports about the preferential treatment given to Chief Unaogu because he was the Minister’s brother. The case was stalled until Justice Chioma Nwosu-Iheme, a powerful and fearless judge, took over the case on 28th April, 1999.

She sentenced the seven suspects linked to the murder to death. Their names were:

In fact, while delivering her judgement, Justice Nwosu-Iheme referred Otokoto and Unaogu as a hardened and unrepentant murderer and a highly-sophisticated criminal respectively. She said that the blood of poor Ikechukwu must be a very strong and powerful one that screamed to God in high heavens for vengeance.

After her epic judgement, all the convicts were ferried to Port Harcourt Prissons in February, 2003 pending their execution. Their lawyers kept on appealing the judgement which was futiles as the sentence of execution was still upheld.

Justice Chioma Nwosu-Iheme would be kidnapped a couple of years by ‘uniformed police officers’  under mysterious circumstances in Benin city and later released.

“The same factors that gave birth to the 1996 Otokoto ritual killings are still in place today: poverty, irrational beliefs in supernatural powers that lead people to believe money can be made from flesh without doing any work, weak/corrupt law enforcement agencies and a super-slow judicial system. The presence of these factors explains why after bloody Otokoto saga, the country still had to face the Okija/Ogwugwu Shrine saga in Anambra state and the Soka forest horror of Oyo state.