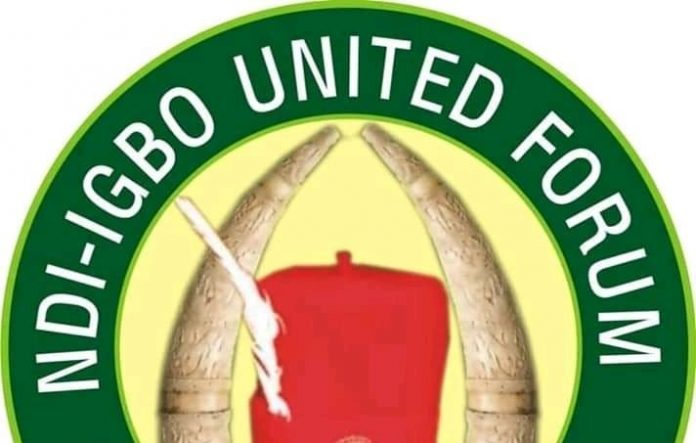 A group known as Ndigbo Unity Forum (NUF) has called on Ndigbo to unite to produce president of Igbo extraction by supporting a strong candidate that will be acceptable by the Northernmost and Southern leaders.

The group however called on Ohanaeze Ndigbo to set up a political mobilization and contact committee to reach out to other geopolitical zones to lobby for Igbo president in 2023.

Read Also: 2023 Presidency: The Many Hurdles Before Ndigbo

The President of NUF Mr. Augustine Chukwudum while reacting to comments by Mamman Daura and Governor Neysom Wike on power rotation called on the people of Igbo land to join hands to actualize its political power share.

“This is wakeup call on Ndigbo to come together and unite to actulize our agenda for president of Igbo extraction by supporting a strong candidate that will be accepted by north and south. Someone who must be a true nationalist. We call on Ohanaeze as an apex Igbo body to set up a political moblisation and contact committe immediately to reach other zone. We call on all Igbo people all over the world to join hands together to actulize our political share.

“Even birds in the bush, fishes in the sea and cows in the bush knows that 2023 is the turn of Ndigbo,that is why we are rasing alaram so that Ndigbo will be at vigil, so that our share will not be lost as it was in the past, during Obasanjo and Jonathan presidency when ndigbo foolishly gave them support only for us to go empty handed without any development in our zone.

“That is why every hands must be on deck to checkmate Governor of River state and co, so that our share will not lost in 2023. Wike alleged kicking against zoning of 2023 president was another way of hoodwink Ndigbo because everybody knows very well that south-south are not in support of presdent of igbo extraction.

“That is why people like us are not suprise when he said that PDP is not working on the zoning that will produce president come 2023 instead they are thinking of how to win the president which is more important to him and his party PDP because of his interest in becoming vice president to a nothern candidate come 2023 which is south-south and northern agenda” Chukwudum stated.