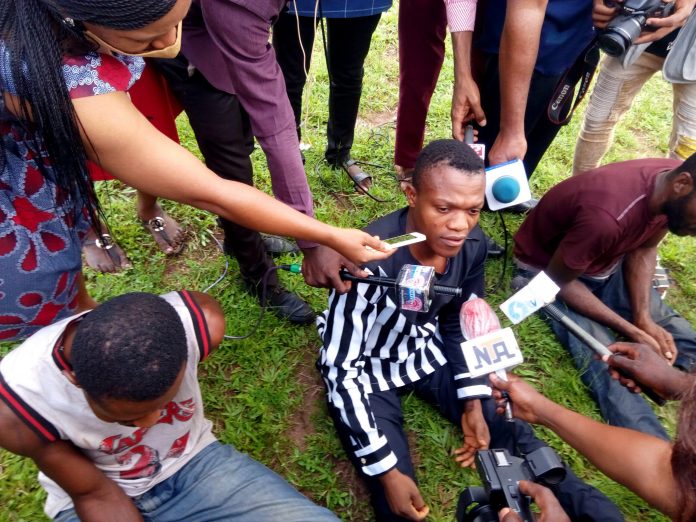 A pastor of Living Faith Church, (Winners Chapel) in Njaba Local Government Area of Imo State, Joseph Anthony, accused of raping an 11-year-old girl (names withheld), in the home of a fellow pastor, has said although he was ‘tempted to touch’, he never raped the girl.

Pastor Anthony was paraded with some suspected armed robbers at the Imo Police headquarters, Owerri.

The Winner’s Pastor was furious that he was accused of what he did not do and that as a pastor he wouldn’t think of rape.

According to the police, “On July 13, one Pastor Joseph Anthony of Living Faith Church of Njaba was arrested for the defilement of one minor; the daughter of his fellow pastor, one Pastor Chukwuma Okoronkwo.

“Preliminary investigations revealed that the said Pastor Chukwuma Okoronkwo accommodated Pastor Joseph Anthony in his house and on the day of the incident.

“The said Pastor Joseph Anthony took advantage of the fact that he was at home alone with the victim and had canal knowledge of her. An investigation is at an advanced stage. He will be charged to court accordingly.”

However, Pastor Anthony told Vanguard: “Let me tell you this; is the father and the mother of the girl that brought me to their house to stay with them, even when I did not want to stay with them. They are accusing me of nothing.”

Asked if he touched the girl at any time, he said: “I was tempted to touch, but I did not do it. I am a pastor. I cannot do it, I know what is right and wrong. Take this from me, I never touched the girl. That is the truth.”

The Winners’ Chapel pastor, Joseph Anthony, was paraded at the Imo Police headquarters over the allegation of raping the 11-year-old girl.