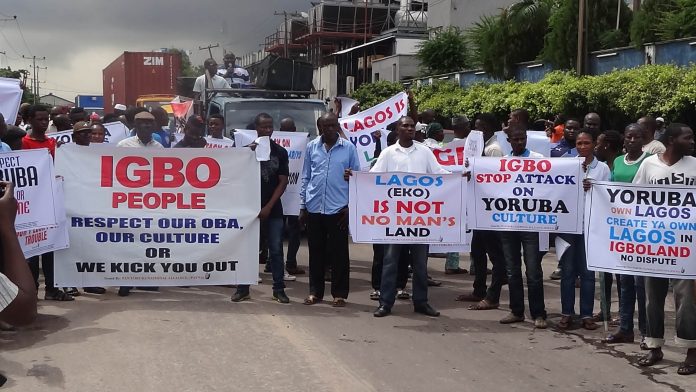 Igbo individuals in some parts of Lagos were brutally attacked and brutalised during the national elections of 9th March, 2019. They were attacked for their perceived support for a particular party.

The attacks have since been condemned by many Yorubas and other Nigerians as well as the international community.

A similar ugly scenario played out before the 2015 general elections when the most revered Oba of Lagos made his well-known threat of ensuring that Igbos who failed to vote for his preferred candidate were swallowed up by the Lagos lagoon. The Oba made the statement during a courtesy call on him by the Igbo leadership in Lagos.

A courtesy call was to give honour to the Oba and not a visit to inform him that the Igbos were in any contestation about who became the Governor of Lagos state. Of course, the Oba’s statement was equally condemned by many Yorubas, Nigerians, and the international community. Soon, another election will come in 2023; what shall be the fate of Nigeria, especially as the presidential contest will move to the South?

This is a delicate matter and a lot of bad blood and gutter-level hate speeches have been making the rounds in social media. It is sickening to see the social media filled with dirty, absolutely false, and malicious hate speeches, one ethnic group in Nigeria against another.

Read Also: Igbos Must Love Themselves Before Presidency – Arthur Eze

Some Yorubas, despite the caution by their wise and peace-loving brothers and sisters, had freely hauled hate speeches against the Igbos, heaping more salt upon the psychological injury caused by the attacks of the last elections. For instance, no less a distinguished person than Senator Oluremi Tinubu, wife of the revered national leader, Ahmed Bola Tinubu, herself originally from South-South (Delta state) had cause to declare that “they no longer trust the Igbos”.

However, one of the most offensive was a video of a Yoruba fellow, who sent out a threat that he and his cohorts would slaughter the Igbos as soon as the opportunity occurs. According to him, Igbos are responsible for all crimes in Nigeria, South Africa, Ghana, Singapore, Malaysia, China.

Another respected editor of The Guardian Newspaper, Femi Kusa, in a viral article sent out globally, called the Igbos “modern jihadists.” He wrote unprintable fallacies against the Igbos that are too indecent to reproduce here. He went to the extent of recalling a sixty-year old claim, which according to him was made by the late Hon. Ahmadu Bello, that the Igbos were not welcome to the North because they would dominate the North. But the most disturbing was his wish to describe Igbos as modern jihadists. Whatever he meant by that was not taken lightly by the Igbos! Is it true that crimes all over Nigeria and the world are perpetrated by Igbos alone?

The Igbo-based argument that Lagos is “No Man’s Land” is one unhelpful, invalid principle of defence against the attacks on the Igbo in Lagos. No Igbo has gone to Lagos with the mind that Lagos is or will ever be an “Igbo land”.

Whatever an Igbo man owns in Lagos, he worked for it! If he owns a landed property, he must have purchased (Paid) for it, and got a power of attorney/certificate of occupancy. Therefore, the claim and justification that Lagos is a no-man’s land is a misnomer. It does not add to or take away whatever an Igbo man or woman can be in Lagos.

Rather, it only instigates more hatred against the Igbo.  Lagos is a Yoruba land and nothing can change that.

There are at least two premises that legitimise the existence of Igbos in Lagos or anywhere in Nigeria. These are the concepts of “nationhood” and “cosmopolitanism”;

Nationhood: Igbos were pulled to Lagos over the past century because consciously the colonial and later, the national governments used Lagos as a Capital. Every citizen has an inalienable right to live in peace and carry out legitimate business in his or her country’s capital.

Along the line, the capital of Nigeria has been moved to Abuja and the process of pulling the Igbos to Abuja has repeated itself. Already, a social media audio message credited to a Governor from the North East was deriding the Igbos, asking why they could ever aspire to become the Minister of the Federal Capital Territory.

Therefore, it will not be surprising that soon the Igbos may be pushed again to also declare Abuja to be a “No Man’s Land” and the hate will continue to rise. It cannot add to or remove the properties that Igbos have in Abuja.

What is helpful and for which the world shall stand with the Igbos is that Lagos and Abuja were/are the nation’s capital. Igbos and any other ethnic group for that matter have inalienable right to live in peace and aspire, under a free and fair democratic process, to hold whatever position the populace may entrust upon them.

Cosmopolitanism: All megacities in the rank of Lagos, and even others which are less urbane by far, have by reason of being urbane become ‘home’ to people of all ethnic, racial, religious, economic and other social backgrounds.

This is why London, Paris, New York, Berlin, and dozens of cities around the world have immigrants in their democratic and governmental systems. For instance, Blacks have emerged in the Parliaments of many American and European nations. The most interesting is that a Muslim immigrant from Pakistan became the Mayor of London. Barack Obama became the President of America.

Millions of Yorubas, Igbos, Hausa, Kanuris, Efiks, and other Nigerians have become citizens of countries around the world by merely living there for a few years. They vote during elections of those countries and many of them have also contested political offices.

The Igbos replicating the same process in Nigeria should not cause bad blood or instigate hatred from other tribes.

How Nnamdi Kanu’s Plans Against Yoruba Backfired On Him

In the past few days, the history and security of Nigeria have been drastically put to test. The justifiable #ENDSARS campaign was launched following a...
Read more
Editorial

Much has been said about the uniqueness of the Igbo Apprenticeship system popularly called ‘Imu-Ahia’, which literally translates to ‘to learn market/ or a...
Read more
Editorial

Numerous political pundits have analysed the pace of development in Igbo land in the context of the first republic politics while giving kudos and...
Read more
- Advertisment -