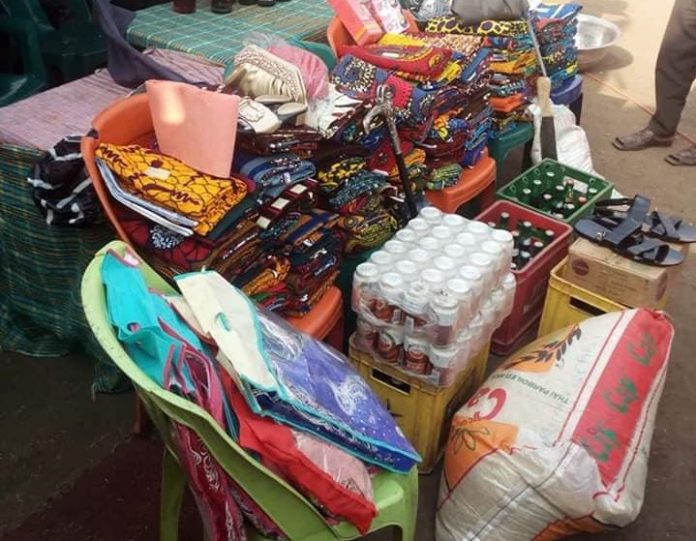 There have been a lot of assertions that Igbo Marriage in Eastern Nigeria is expensive.
While this is widely believed, a lot of people do not also know what is required to get married in the East

For an Igbo girl, it is when you come of age, that you start hearing stories of how Igbo bride price is costly. Young Igbo men and non-Igbos, now seem to weave their delay in marrying their Igbo girlfriends with explanations/excuses of wanting to save more to accommodate the cost.

These days, lots of Igbo brides are getting married and no one is breaking into the bank to do so. Men are marrying Igbo women according to their means. So why does this assumption persist?

The Igbos are the predominant occupants of Eastern Nigeria. They are very industrious people with an estimated population of 33 Million as recorded in 2016. They are spread across Abia, Anambra, Ebonyi, Enugu, Imo, and some parts of Delta state.

They have a very rich traditional heritage with long-standing respect for culture and tradition in every aspect of their day to day lives. When it comes to marriage in Igbo land, there is a process involved before the bride and the groom are pronounced as husband and wife according to the native law and custom generally known as the Igba Nkwu Nwanyi (Traditional Marriage).

A prerequisite to this union is the payment of the bride price and there are steps that must be taken before this payment which include:

Courtship Stage (Getting to know each other):
When a man is interested in an Igbo lady, the usual practice is to get to know each other’s likes and dislikes before making intentions known to the family of the lady. This process is common to all tribes in Nigeria. The courtship period will also afford the man the opportunity of knowing where the lady hails from and what some of their traditions are. In Igbo tradition however, a man’s family may handpick a girl they like and arrange for marriage on behalf of the man. This is common with mothers who want their successful sons to marry girls they choose.

‘Knocking at the door’ (Making your intentions known)
This is a serious stage, more like a semi marriage ceremony with the whole works. These days though, most people do it on a low-key level due to costs, circumstances or so that people with evil intentions won’t foil wedding plans. When a man’s intention has been known and he is serious in having an Igbo lady’s hand in marriage, the first process is to undergo what is known as knocking at the door, called Iku Aka n’Uzo.

This ceremony is done thrice and it is accompanied by the carriage of palm wine. These three times must coincide with three market days. If the first Iku Aka n’Uzo falls on an Eke market day for example, it means the man will repeat the second and third Iku aka n’Uzo on Eke market days. If it falls on Nkwor market day, the same process is followed.

The man must come with at least two members of his family to see his future bride’s family and specially inquire for the hand of that particular lady. In the olden days, palm wine used to be the main drink that was used in coming for this mission, but modern life has seen the use of beer and hot drinks in carrying out the iku aka n’uzo ceremony. Though, some still stick to that tradition. When you come for this ceremony, you will be asked series of questions by the girl’s people.

Your future in-laws will then make their own investigations about where you come from and your family lineage and background. This is done to avoid marriages between closely related families and to the same bloodlines. It is also done to uncover if there is a history of madness, or any taboo related occurrence. After the Iku Aka n’Uzo, if the investigation is not favorable, the family of the girl will disapprove of the union.

After the third Iku Aka n’Uzo, the man’s family will request for a list containing all the items for the traditional marriage rites. Most times, the list is gotten after conferring with the family elders. In circumstances where the girl comes from a royal or highly respected family, the Eze or chief compiles the list. 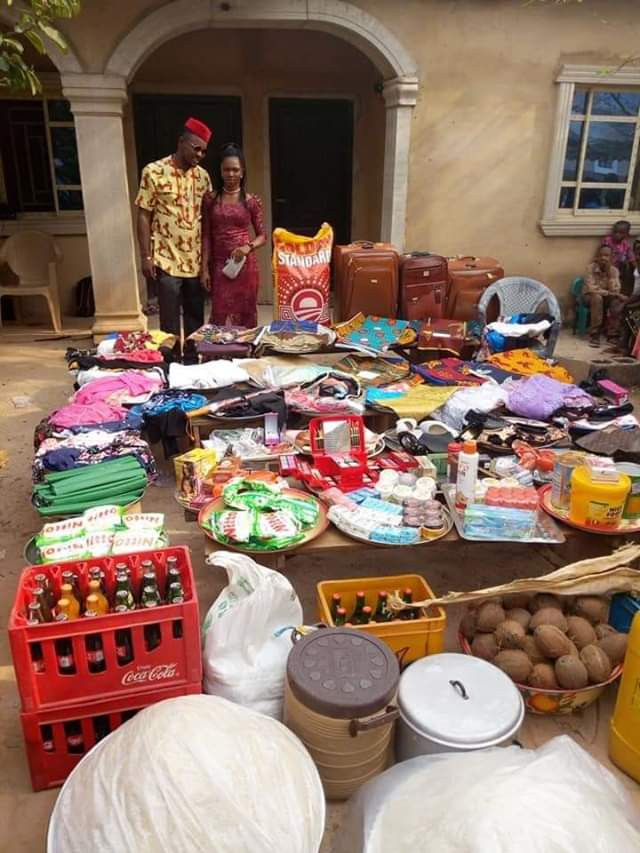 Details of the listThe father of the girl has his own part in the list that must be fulfilled. These items must be bought according to how they appear on the list. (A few items may be added or committed):

Walking stick
Traditional cap
Native dress that has been sewn
Pair of shoes
₦20,000 to ₦30,000 cash depending on the family
Mother’s part

The bride’s mother also has items to be bought for her on the list. (A few items may be added or committed):

The Umunna (Male relatives)
After settling the list for the father and mother, next you get to the list for Umunna. Their list also contains items that must be bought and presented to them before the marriage rites are approved. (A few items may be added or committed):

The women’s group is not left out. They have their own list which must be fulfilled. (A few items may be added or committed):

Some of the above-listed items can be monetized by the groom in agreement with the girl’s family to make it convenient for them in cases where the location of the ceremony is a bit far. After settling the father, mother, Umunna (men), and Umuada (women), the next and crucial stage is the payment of dowry which is regarded as bride price.

This is not done outside, but inside the room. The man and two members of his family will go inside to meet his father-in-law and discuss the bride price (dowry).

On the cost of Igbo bride price
In the East, there is no fixed amount for bride price, each family determines what their son in-law pays.

Some parts of Abia state set the bride price at 30 shillings. The irony is that if you provide all that is stated in the list and neglect to pay the 30 shillings, you are not yet married.

On the other hand, apart from the aforementioned, Anambra, Enugu, Ebonyi, and Imo states do not have any particular amount known as bride price. The prices vary “as the spirit leads” when it comes to this.

As regularly observed, parents of the bride will decline accepting the bride price, stating instead that the list for the Umunne is fulfilled and to go ahead and live in peace with their daughter. Even more notable in some cases are parents collecting a particular amount for bride price and then returning it back to the groom with the instruction/advice to take care of their daughter. They always assert that their daughters are not for sale.

The government price for dowry is ₦60 (Sixty Naira) which is boldly written on the government stamp that is given to the groom’s family. Most families in the East do not make huge demands for bride prices because they believe they are not selling their daughters. So no matter how much one pays for dowry, what is officially given as evidence is the ₦60 government stamped receipt. After the dowry has been paid, the father of the girl or elder brother, elder in the family will then place the young lady’s hand in that of the young man’s father.

The father of the young man will then bless the couple and as soon as the young lady is handed over, there is jubilation and singing by both families. If the bride has a little sister who is not married, she will follow the couple home and stay for about a week before going back home. They will buy things for her when she is returning.

On Igbo marriage
In the case of serious disagreement, if the woman is no longer interested in the marriage, she will return the dowry to her husband through her family. This must be done before the woman is free to marry another man.

In the East, once the dowry of a woman is paid, you both become one. If she dies, her corpse is usually taken to her husband’s place for burial. In extreme cases, where the woman has complained to her family about maltreatment by the man before she dies and the man goes ahead to bury her in his place, her corpse can be exhumed by her own family for reburial in her own village.

Is Igbo bride price cheap?
In summary, the dowry paid for the average Igbo lady cannot be pegged because it differs from family to family, but it is generally small. What consumes a lot is the traditional marriage expenses tagged ‘lists’ and this discourages a lot of eligible bachelors from taking an average Igbo girl’s hand in marriage.

A rough estimate of a million naira is usually needed to accomplish all the various rites before the actual dowry is paid and both partners are declared as husband and wife according to the standard Igbo tradition.

On the other hand, most of the items on the lists could be monetised according to the pockets of the prospective grooms all depending on the understanding among all parties involved so men need not shy away from proposing to their Igbo sweethearts.

How Nnamdi Kanu’s Plans Against Yoruba Backfired On Him

In the past few days, the history and security of Nigeria have been drastically put to test. The justifiable #ENDSARS campaign was launched following a...
Read more
Editorial

Much has been said about the uniqueness of the Igbo Apprenticeship system popularly called ‘Imu-Ahia’, which literally translates to ‘to learn market/ or a...
Read more
Editorial

Numerous political pundits have analysed the pace of development in Igbo land in the context of the first republic politics while giving kudos and...
Read more
- Advertisment -