Home Politics Why Are Igbo Governors Scared Of The Press?
Politics

Why Are Igbo Governors Scared Of The Press? 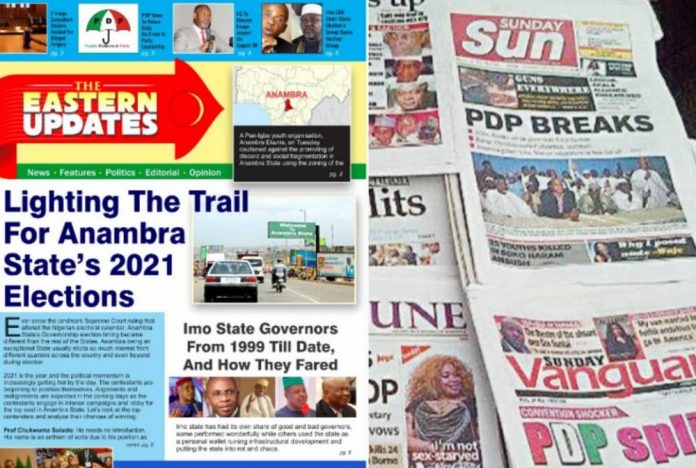 On Wednesday, April 22, 2020, the Governor of Ebonyi State, Dave Umahi, made an incoherent state-wide live broadcast announcing what he described as “a life ban” on the State’s Correspondents of Vanguard Newspapers, Mr. Peter Okutu and Mr. Chijioke Agwu of The Sun Newspapers from entering the Government House and all other government premises in the state.

Umahi had directed the Chairman of Ohaukwu LGA, Clement Odah, to get Okutu arrested for reporting the alleged military invasion of Umuogodoakpu-Ngbo village on Monday, April 20, 2020. Earlier on Saturday, April 18, 2020, the governor had also ordered the arrest of The Sun’s Agwu for reporting on the outbreak of Lassa Fever in Ebonyi.

In that broadcast filled with petulance unfit for the holder of the exalted Office of State Governor who is regarded as a father of all in his state, Umahi not only declared that he could no longer guarantee the reporters’ safety, he also deliberately incited the people of Ebonyi against the media. He declared: “Ebonyi people are very angry with the press and let me warn that I won’t be able to control them or know when they unleash mayhem on you if you continue to write to create panic in the state”.

Justifying his purported ban, Umahi thundered: “Okutu is fond of degrading Ebonyi State, and I don’t know why my officials have allowed him to continue to do that. Because he is not from Ebonyi State, I want to ban him for life with Chijioke Agwu. I don’t want to see them anywhere in any state facility”.

However, on Thursday, April 23, 2020, a statement issued by Francis Nwanze, Governor Umahi’s Media Assistant, debunked the “life ban” story and alleged that the video and audio recordings which still abound in the public arena were “doctored”.

That was what the state government should have done in the first place instead of harassing journalists and breaching their constitutional rights. Even at that, the statement failed to alter the fact that Governor Umahi had seriously bungled in his anti-media adventure.

The journalists in Abia state under Governor Okezie Ikpeazu weren’t so lucky.

On March 24, over 20 police officers in company of Chief of Staff to the Abia governor, Tony Agbazuere, and former Commissioner of Police, Ene Okon, stormed Mr. Ogbonna’s chambers to arrest him.

Read Also: The Colossal Failure Of Okezie Ikpeazu As Governor Of Abia

Before his arrest, Mr. Ogbonna had made critical comments about public officials and their policies via his Facebook page.

Shortly after the arrest of March 24, he was arraigned alongside another person for cybercrime and publishing false and threatening messages through the internet against the governor, Okezie Ikpeazu. He was arraigned at a magistrate court in Umuahia.

The offences, according to the charge sheet, are punishable under Section 27(1) (a) and 18(1) of cybercrimes (Prohibition Prevention ETC) Act, 2015.

However, because the magistrate court lacked jurisdiction to hear the case, he was then remanded at a correctional facility in the state capital until April 28, when he was arraigned before the Federal High Court in Umuahia and was granted bail.

Mr. Ogbonna was, however, rearrested by SSS operatives on his way out of the correctional facility in Umuahia on the same day. This was after he had perfected the bail conditions.

The SSS moved Mr Ogbonna to its office in the state and subsequently its headquarters in Abuja, where he has been in custody, without any charges against him.

None of Mr Ogbonna’s friends, relatives or legal representative has been allowed to visit him since he was transferred to Abuja.

All legal efforts to ensure the release of Mr Ogbonna from the SSS custody have been unsuccessful.

On June 29, the Federal High Court in Umuahia ordered that the SSS should release him unconditionally, thus awarding a ₦1.5 million damages in his favour.

Also, on July 6, in the suit challenging the infringement of Mr Ogbonna’s human rights filed in Abuja, the SSS refused to present him in the FCT High Court and the case was adjourned to July 17.

Uzoma Ogbonna, the wife of Mr Ogbonna, as well as human rights activists and organisations have protested the illegal detention, calling for the immediate release of Mr Ogbonna.

“They should release my husband. He just spoke the truth and he is being persecuted for that. We need him. The children need him,” she said in a telephone interview.

Mrs Ogbonna, who recently delivered a baby, told reporters that she has been denied access to her husband for more than a month.

She lamented the hardship that comes with taking care of the four kids during the pregnancy and after.

“The pregnancy was 10-months old before I went to bed. You give birth and your husband is nowhere around. It is not easy doing everything alone.”

Worried about the condition of her husband, Mrs Ogbonna said there are possibilities that Mr Ogbonna’s health has worsened, noting that he suffers a chronic ulcer.

In another case, with a much luckier reporter who was warned beforehand, Governor Ikpeazu’s aide was caught in leaked audio threatening a reporter not to write about the ills happening in Abia state or else he would be ‘disappeared’ to Abuja.

The Governor’s aide who was heard telling the reporter that he was about to lock the reporter up in Abuja where the reporter’s family will not be able to bail him – stated that whether the Abia State Government pays workers salaries or not, that the reporter should stay mute or face the consequences.

“Whether workers go on strike, or whether pensions are paid or not, or whether roads are constructed, I command you to not publish or write about it”

“Don’t you ever again write anything about Abia Government or Abia government official.” He continued, “You know why? Because if you do, then what happened to Mopol would happen to you“.

One of the sterling, outstanding qualities of a good leader is reception to criticism and acknowledgment of faults. No man, organisation or Government institution is overly perfect, but accepting one’s shortcomings goes a long way to show how candid and straightforward an individual can be.

Threatening fire and brimstone against the media and using political powers to intimidate and frustrated journalists would only expose how terrible and horrendous a leader is.

Independent National Electoral Commission (INEC) said its headquarters in Owerri will be used for the collation and declaration of results for the 5 Dec....
Read more
- Advertisment -