Christie’s Sale Of The Igbo ‘Alusi’ Artworks And The Significance

Last week in Paris, France, auction house Christie’s proceeded with the sale of two Igbo ‘Alusi’ artifacts in the face of public outcry over their suspicious provenance.

Nigeria’s National Commission for Museums and Monuments demanded that auction house Christie’s stop the sale of the artifacts, even letters, and summons from Igbo envoys sent to stop the sale fell to deaf ears.

The pair of “museum quality” Igbo alusi statues went under the hammer for 212,500 euros each. 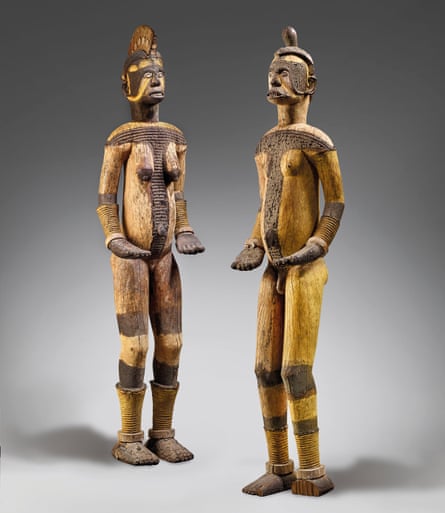 The two pieces from south East Nigeria were among a number of “African masterpieces” that Christie’s said came from an “important European private collection” they declined to name.

But the head of the National Museum in Nigeria’s Benin City said that objects were stolen from the southeast during the Biafran war.

The auction house refused to stop the sale, saying the objects had been previously sold at a major international art fair.

“All objects in this sale were fully compliant with all applicable legal frameworks,” it said in a statement to AFP.

The auction house lists the provenance of the sculptures as the collection of Jacques Kerchache, a leading collector of African art, adviser to the late President of France Jacques Chirac, and an influential figure in the creation of the Quai Branly museum in Paris.

The pieces passed to another private collection after Kerchache’s death in 2001.
That such sales can proceed while art looted by the Nazis invites stricter scrutiny is reflective of a racist double standard, and rooted in European condescension towards African nations’ claims over their cultural property.
Not until the landmark 2018 report on the Restitution of African Cultural Heritage, commissioned by French President Emmanuel Macron, did a European government commit to returning artefacts that African countries had been demanding for decades – yet even that recommendation isn’t legally binding.
The Benin Dialogue Group, established in 2007 and comprising a consortium of European museums and the Nigerian Government, has been discussing the repatriation of the famous Benin Bronzes for over a decade; no single artwork has yet been repatriated. It is an absurd irony that some museums have proposed preconditions for the ‘safe’ return – or even simply long-term loan – artefacts that came into their possession by violence.
The loss of cultural objects during the war was immense.
Anna Craven who worked as an ethnographer and curator at the Nigerian Federal Department of Antiquities in Jos, central Nigeria was present in 1970 during a raid where Cameroonian traders were stopped with dozens of cultural artefacts belonging to the Igbo tribe.

The sale of these sculptures is a slap and a spit on the face of Igbo culture. The anonymity surrounding Christie’s lack of detailed information on the matter suggests more than what is being let out.

Some things are worth more than money, especially when it comes to one’s culture and heritage. And the fact that it has been substantially proven that these artworks were stolen during the Biafran war of 1967 to 1970.

Countless Alsui sculptures were systematically looted during the war from Mbari houses – communal shrines lined with symbolic murals and sculptures of Igbo deities in Anambra state, the frontline of the war in the majority Igbo south-east of Nigeria.

As the conflict raged, local conspirators collaborating with wealthy benefactors engineered the exodus of cultural treasures across the border to Cameroon. 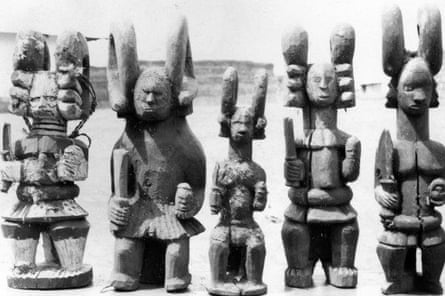 It does not matter whether Jacques braved the bullets and bombs, went by foot into Biafra and carted away or seized these objects. The main issue is that in a place that was at war, people conspired, went in, took away valuable materials of artistic and cultural value, and sold them.

To prevent the reoccurrence of this phenomenon, it is very important that Ndi-Igbo set up an international watchdog committee to monitor and prevent the auction and sale of more fundamental fragments of Igbo history and heritage.

Igbos must push for stronger laws restricting the sale of cultural patrimony, whatever the odds. The fastest route might be attaching conditions to bilateral trade and investment agreements.

American and European institutions cannot be allowed to profit from the sale and transference of colonial loot. In time, Igbos will hopefully have a stronger legal footing to claim what was always rightfully theirs.