Home Opinion Politics Of Land And The Airforce In Enugu
Opinion

Politics Of Land And The Airforce In Enugu 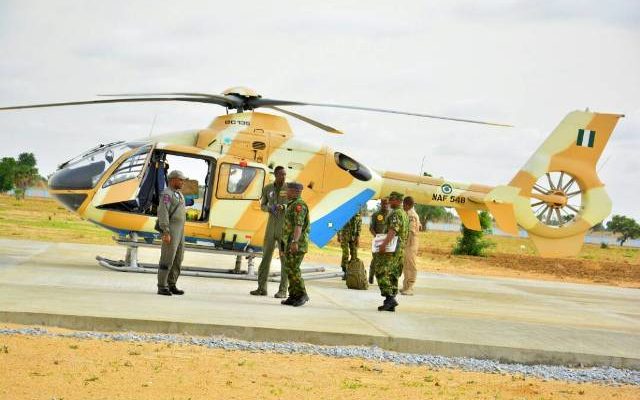 Few weeks back, President Muhammadu Buhari was so enraged about the grave threats to national security and the rapidly waning war on terror marked by series of bombardment of soft civilian targets by armed Fulani herdsmen, Islamic terrorists and armed bandits in most parts of Northern Nigeria that he summoned his military commanders to a round table. He lambasted them for failing to win these battles against insurgents and armed bandits and for the deteriorating security situation in Nigeria. He then gave them on final warning, even as the National Security Adviser to Buhari, Major General Monguno confirmed to the media that the security chiefs, including himself, had been placed on last warning.

However, it would seem that whilst the security chiefs are feeling the heat from the President’s final warning, some of their field operatives who are not involved in the actual battles don’t seem to care as they have continued to get involved in civil and land matters that are far from their constitutional mandates. One of such case is the Nigerian Air Force in Enugu. Based on credible petitions from some distressed land owners in Enugu South Local Government Area of the state, a Civil Rights Advocacy group Human Rights Writers Association Of Nigeria (HURIWA) waded in by carrying out series of investigative inquiries to ascertain the veracity of the claim that the Nigerian Air Force in Enugu are being deployed by the Enugu State Commissioner for Housing to allegedly corner some landed assets of some persons bought from the community.

HURIWA had urged the Chief of Air Staff, Air Marshal Sadique Abubakar to investigate the allegation against his officers accused of being hired allegedly to harass and intimidate legitimate land owners with a view to depriving them of their Constitutionally guaranteed fundamental human rights to own immovable property in any part of the country.

In a media briefing in Abuja, HURIWA restated the allegations made by some petitioners in Enugu State who approached the Rights group claiming that they were being harassed and physically abused by some officers of the Nigerian Air Force even as the Rights group said it was not proper for the spokesperson of the Nigerian Air Force to dismiss these weighty allegations with a mere wave of the hands without carrying out discreet probe of the allegations as made even in a letter from the legal representatives of the Landlords that was reportedly served on the office of the Chief of Air Staff.
The group said they were also sent some photographic and video evidence alleged to be the vehicles driven to the site by the alleged Air Force personnel in Enugu.

We asked the petitioners to seek redress through the Acting Chairman of the Economic and Financial Crimes Commission because their claims that those parading as land owners who approached the Enugu State ministry of Housing to take over ownership of the plots of land had allegedly sold their lands to investors from all across the country on the understanding that the allocations bought would be turned into sprawling estates.

HURIWA said under no circumstances should any Nigerian be deprived of his/her human and commercial rights to own immovable property in Nigeria unjustly “and we are shocked that some Nigerians are still behaving like we are in the 16th century and have forgotten that in the 21st century Nigeria, Citizens under a constitutional democracy have the fundamental human rights to ventilate their distress and seek redress whenever they believe that they are about to be deprived of their constitutionally guaranteed fundamental freedoms.”

The Rights group said it has the highest respect and regard for the Nigerian Air Force which is why it has urged the Chief of Air Staff to investigate the allegations against his officers and if verifiable, adopt the best approach to sanction erring officers.

The copy of the petition sent to the office of the Chief of Air Staff over this issue and signed by a counsel, Obinna Ugwu stated: “Our clients considered it quite expedient and necessary to forward this complaint to you praying for your intervention which has become necessary to put on check the unlawful use of the Personnel of the 155 Nigerian Air Force base Enugu for some purposes which are not only illegal but also unbecoming of the institution of the Nigerian Air force.

“By the said judgement, the Nigeria Police Force, Enugu state command which prior to the institution of the suit in court by our clients was an instrument in the hands of our clients’ assailants was restrained from further interference in our clients’ right of peaceful enjoyment of the said land being the subject matter of the litigation.

“Sequel to said judgement, the Nigeria Police force, Enugu state high court, our clients commenced a peaceful enjoyment of the said land without the interference of either the government of Enugu state, Ogui Nike people and/or any of the security agencies.

“However, on the 18th day of June 2020, our clients in what seemed to be a Hollywood scenery noticed to their consternation the invasion of the said Umunnuguw/Ndiaga layout by gun bearing as well as cudgel wielding fierce looking personnel of the Nigerian Air force who without any notice whatsoever began to whip and chase away the indigenes of the above villages from the said layout.

“The investigation conducted by our clients revealed that the said personnel were deployed to the layout by the Air Officer Commanding the 155 Air Force Base Enugu at the instance of the commissioner for housing development, Enugu state and who even prior to his appointment, had exhibited more than a casual personal interest on the said layout.

“It is important also to bring to your knowledge the fact that the government of Enugu State does not have any hand in what your personnel are doing in our client’s villages as your Personnel who obviously are acting out the script handed down to them by the said Commissioner are only being used to further some personal and selfish interest contrary to their constitutional duty of protecting the aerial territorial jurisdiction of this nation.

“Furthermore sir, it is our humble view an aberration that our client’s assailant will easily resort to the use of Nigerian Air force for his clandestine purposes regardless of the overwhelming presence of the Nigeria Police force, Nigeria securities and civil Defence corps and State Security Services who are more disposed and more constitutionally empowered to handle such sundry civil misgivings like land disputes where one exists.

“It is therefore in view of the above and in consideration of the enviable reputation and professionalism the Nigerian Air Force has built over the years that we most respectfully write to humbly request that you prevail on the Air Officer Commanding the 155 Air Force Base Enugu to withdraw the personnel of the Nigerian Air Force deployed to Umunnuguw/Ndiaga layout particularly as there is no unrest, riot, war, etc in these two villages where your personnel from the 155 Nigeria Air force base Enugu are currently using brute force against innocent citizens of this country.

“In confidence that our client’s request will be granted, we do on behalf of our clients humbly express a heartfelt gratitude to you.”

But the NAF has denied the publication by HURIWA. The Director of Public Relations and Information Nigerian Air Force, Air Commodore Ibikunle Daramola stated that the online publications which alleged that some NAF personnel in the State confiscate land from owners and sell to land speculators is not only laughable, unfortunate and ridiculous but also against all known ethics of Journalism, alleging the Association was out to smear the good image of the NAF and dance to the tune of whosoever had engaged it, as no effort was made to contact the NAF before going to press.

How Uzodinma, Buratai Are Harassing Imolites With Soldiers

After the EndSARS protests which took Nigeria by storm in October, several state Governors slammed curfews on their citizens to further curtail the mayhem...
Read more
- Advertisment -