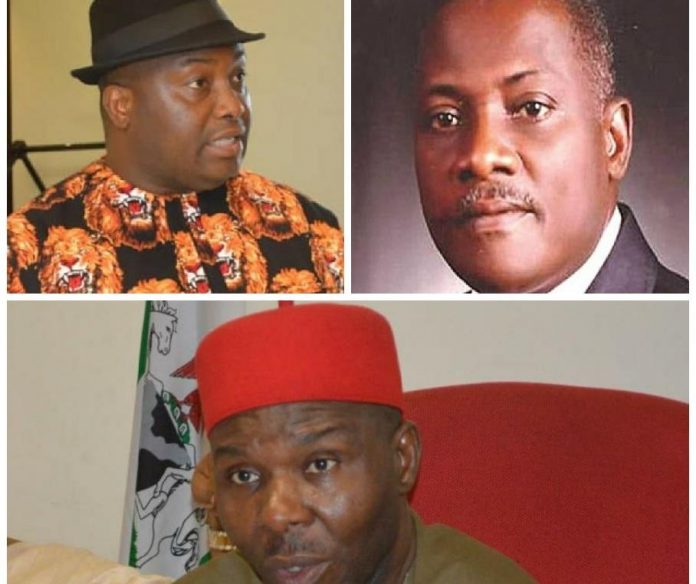 During plenary on Tuesday, July 14, 2020, Senator Utazi urged the Nigerian Senate to acknowledge Chukwuma as one of the industrialists boosting Nigeria’s economy.

The Enugu Senator lamented that some Nigerians, especially those of South East origin, have developed the habit of running Chukwuma and his company that manufactures the IVM brand of vehicles down.

”It was highly disturbing and worrisome that such plots are coming from people within the same geo-zone with the industrial giant,” he said.

“Chief Innocent Chukwuma has done more than enough in getting the country industrialised as far as automobile sector is concerned, for some people to be ganging up against him, which must be condemned by the Senate.”

However, before Utazi completed his submissions, Senator Ubah was heard at the background apparently opposing him, wondering why such a local issue should be brought to the floor of the Senate.

The Senate President, Ahmad Lawan called on Utazi to desist from introducing controversial matters with ethnic colouration on the floor of the Senate.

“Please Distinguished Senator Utazi, rest your case on this motion which has already stirred controversy because this chamber should not be reduced to this type of discussion,” Lawan said.

Even at that, the noise the motion generated heightened with voice of Senator Ifeanyi Ubah sounding louder than those of others.

It took the Senate President few minutes before he could restore normalcy in what almost became a direct verbal exchange between Utazi and Ubah.

After the plenary, Senator Ubah addressed journalists with a prepared press statement entitled: “Ifeanyi Ubah: The Biggest Patroniser of Innoson Vehicles in South-East”.

The Anambra Senator said insinuations by some faceless persons that he rejected patronage of lnnoson vehicles during a Senate committee meeting was wrong because he is the biggest patron of Innoson vehicles in the southeast.

“My attention has been unavoidably drawn to a grossly misleading and fictitious narrative credited to certain faceless, pseudo media elements who in the figment of their imaginations claim that I rejected patronage of lnnoson vehicles in a Senate committee meeting.

“Ordinarily, a lot of people believe that there liS no good reason to personally respond to such a laughable and poorly concocted lie. But the truth is that allowing such a narrative to thrive unaddressed will be a big disservice to my supporters and the reading public.

“In this regard, to put issues in clearer perspective for the benefit of all well intended Individuals that abhor deliberate distortion of facts, I would like to categorically state that:

“Presently, I am the biggest private patronizer of lnnoson vehicles in the South east today. The very first car that I gave my only beloved daughter when she clocked 18 years is an Innoson (lVM) vehicle which she still drives till date. The car is still parked in my Lagos residence.

“It is therefore ridiculous and laughable to insinuate that a man who bought his only daughter an lnnoson vehicle would kick against procuring the same brand of vehicle for Senators.

“In my political engagements, l have purchased over 30 trailers of lnnoson plastic products worth over 400million.

“In line with my ‘think home’ philosophy, I also purchased FC lfeanyi Ubah’s official vehicles three Coaster Buses, Trucks and SUV’s from lnnoson. In total, I have spent over N700million in purchasing both vehicles and other products from lnnoson from my personal pocket.

“Let me say without minclng words that in the entire Southeast, I am the only individual with the largest units of Innoson vehlcles in hIs fleet.

“From the onset till date, I have maintained a very brotherly and cordial relatlonship with Chief (Dr.) Innocent Chukwuma, Chairman of Innoson Group whom I have always patronized and been at the forefront of promoting his brand.

“Therefore, I advise those trying to fan the embers of discord between two brothers to desist from such as it is a failed plot that is obviously dead on arrival.

“Another glaring fact that further exposes the hollowness of this poorly scripted propaganda is the fact that the Nigerian Senate already gave out official cars to Senators since last year.

“Therefore, I have never been in any committee meeting to discuss the official cars to be procured and distributed to Senators.

“Ordinarily, it is not in my character to bring my investments and patronage dealings with brands to the public domain, but for the purpose of clarity, I have decided to set the records straight with these barefaced facts and figures.

“To this end, I wish to appeal to the general public to kindly disregard this misleading report and always endeavor to reach out to my media office to ascertain the authenticity of such stories in future instances.

“I also wish to reaffirm my utmost commitment to promoting the Igbo economy and our ‘think home’ philosophy.”