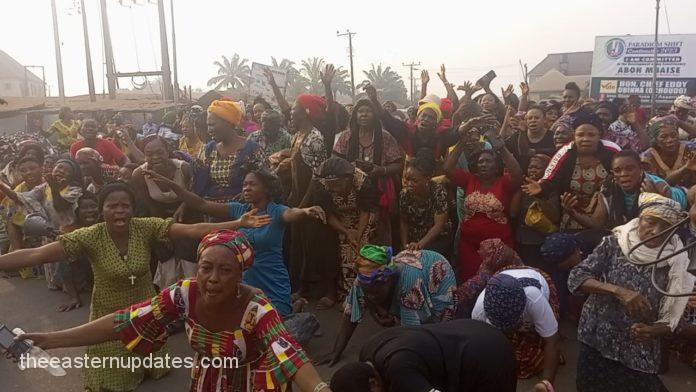 The Eastern Updates reports that the aggrieved women, particularly those of Umunneato Nguru which comprises Egberede, Eziala, and Okwu Nguru, trooped out in their numbers to protest the continued detention of Nwokocha.

Recall that Nwokocha, who is the Chairman of Mbaise Council of Traditional Rulers, was arrested by the Imo State Police Headquarters, Owerri, on 28 December, 2022, after a notorious member of the proscribed Eastern Security Network, ESN, Mr. Chinwendu Nwagwu, accused him of sponsoring them.

Nwagwu, aka Onye Army, who hails from Umunneato with Nwokocha, mentioned his traditional ruler’s name and Jude Egwim from Mbaise as their sponsors through one absconded Mr. Ihedioha, who gave them N120,000.

The women, who refused to observe their Eke Nguru Market Day, protested with chants of agony songs over the continued detention of Nwokocha.

One of the leaders of the rampaging women, Florence Opara, from Okwu Nguru, who spoke to reporters, insisted that Nwokocha does not encourage nor tolerate crime in the society.

She called on Imo State Governor, Senator Hope Uzodimma, to use his power as the number one citizen of the state to effect the release of Nwokocha.

Also speaking, Mrs. Getrude Nwaegbu and Mrs. Florence Ogbonna, explained that the community had been in agony since the arrest and detention of the monarch.