HomePoliticsUzodinma Meets Buhari Over Insecurity After Attack On Ohakim
Politics

Uzodinma Meets Buhari Over Insecurity After Attack On Ohakim 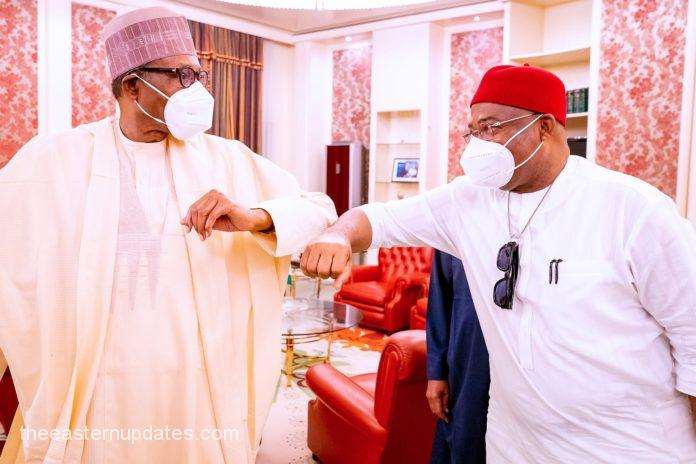 The Governor of Imo State, Hope Uzodinma on Tuesday met President Muhammadu Buhari behind closed doors at the Presidential Villa, where both men deliberated on critical infrastructures that would boost security in the state.

The Eastern Updates reports that the visit is coming barely a few hours after a former governor of the South East state, Ikedi Ohakim escaped attacks from gunmen in Mbano.

The attack led to the death of four police officers who were in the convoy of the ex-governor.

Tuesday’s meeting, afforded Uzodinma an opportunity to secure presidential approval for some security surveillance equipment for the state.

The visit was also to thank the President for the support from the presidency since Uzodinma assumed office, following the Supreme Court verdict.

His words: ‘I made an appeal to the President for further support, especially to support us with some technological deployments, we have planned to be able to do an advanced kind of security control in the South East. And he has also given his approval to that.

‘Any moment from now, we’ll be getting some surveillance equipment and some modern technologies that will help us manage security so that we can fight crime with little or no collateral damage to the environment.’

Commenting on support enjoyed from the Federal Government, he said: ‘I came on behalf of my people, to also thank Mr. President for the various supports he gave to us during this period of security challenges and the support he’s also given to us in terms of the various approval.

‘The approval to convert Federal Medical Center Owerri to a University Teaching Hospital for the Federal University of Technology, the approval that converted Alvan Ikoku College of Education to a federal college of education. Only two weeks ago, Igbo that came home from Lagos and outside South East enjoyed the benefit of the Second Niger Bridge, something that is worthy of commendation.’

The Eastern Updates reports that in recent times, Imo State has become the hot bed of insecuitry in the south east region.