HomeFeaturesChieftaincy Title Conferred On Adichie In Her Hometown
Features

Chieftaincy Title Conferred On Adichie In Her Hometown 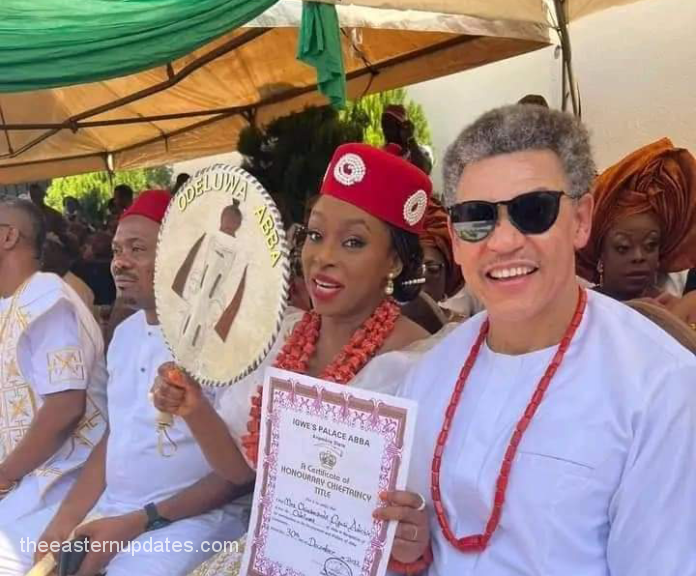 Popular writer, Chimamanda Adichie, was on Friday afternoon conferred with a chieftaincy title by her hometown, in Anambra State.

Adichie, who hails from Abba in Anambra State, was on Friday honoured with the title of ‘Odeluwa Abba’.

The Governor of Anambra State, Charles Soludo, amongst other dignitaries were present at the ceremony.

Read Also: 2023: I Can See My President In You, Adichie Praises Obi

A Facebook user, Uche Nworah, who shared photos from the ceremony, wrote, ‘Award-winning novelist, Chimamanda Adichie, was on Friday honoured by her native abba hometown, Njikoka LGA, Anambra State, with the chieftaincy title of odelụwa (she who writes for the world).

The Eastern Updates recalls that the celebrated writer, had a few weeks ago marked the 80th birthday of her late mother, Grace Ifeoma Adichie.

Sharing a video of herself, her mum, and her brother on her Instagram page, the author mourned her mother’s demise, describing it as surreal.

Chimamanda’s mother died in March 2021, barely eight months after the author had lost her father, James, to a brief illness.

In her caption, Chimamanda noted that her mother’s death changed her life forever, stating that they had always had plans for an elaborate 80th birthday celebration.

The author said, ‘It is still surreal how suddenly you left us, how swiftly our lives changed forever.

‘You would have turned 80 today. We had always planned a big 80th birthday party.

‘I imagine you, sparkling in a pink or purple george wrapper, fussing about which guests had not been served food, dancing and then telling us your back hurt, laughing your full light-filled laugh.’