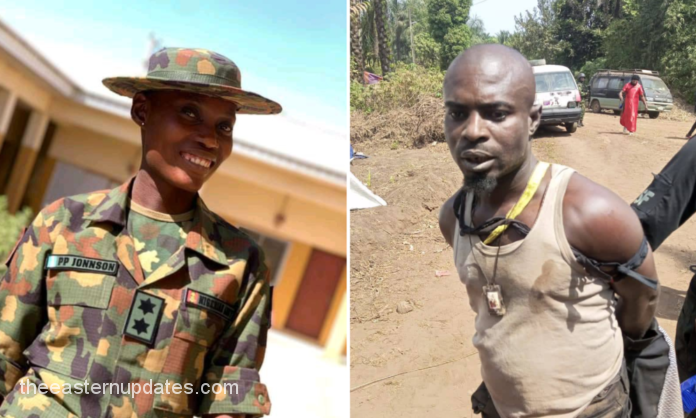 The Nigerian Army and the Department of State Services (DSS) yesterday confirmed the rescue of a female Lieutenant, P. P. Johnson who was abducted by unknown gunmen a fortnight ago.

The Eastern Updates reports that Army officer had been moved to a forest bordering Enugu State and Ihube Okigwe Local Government Area in Imo State.

The gang stripped the officer, from Abia State, and made a video of her on the 26th of December, Boxing Day.

Read Also: I’ve Not Been Given Food, Drugs By DSS For 9 Days — Kanu

The voice behind the recording said they were UGM, not members of the Indigenous People of Biafra (IPOB).

‘This is a wonderful information to our people still in the Nigerian military. That is how you people will die one after the other.

‘Here it’s happening live in Enugu today 26th of December 2022. A Lieutenant, 2 star in the military…’

After speaking in Igbo for some seconds, the voice continued: ‘This is unknown gunmen. Unknown gunmen has nothing to do with IPOB.’

‘Unknown gunmen doesn’t know IPOB. What we are after is Biafra. Whether they like it or not, we must gain our freedom.’

‘This is Enugu highway, we’ll be killing them one after the other’, he adds.

The incident is believed to have occurred along Enugu-Port Harcourt expressway.

The victim passed out on December 17 after completing the Direct Short Service Course.

The Eastern Updates gathered that the Army leadership swung into action after Johnson was reported missing.

It is suspected that the recording, which circulated on the internet, might have assisted security agencies in tracking the abductors.

The mastermind of the abduction was also arrested by the troops.