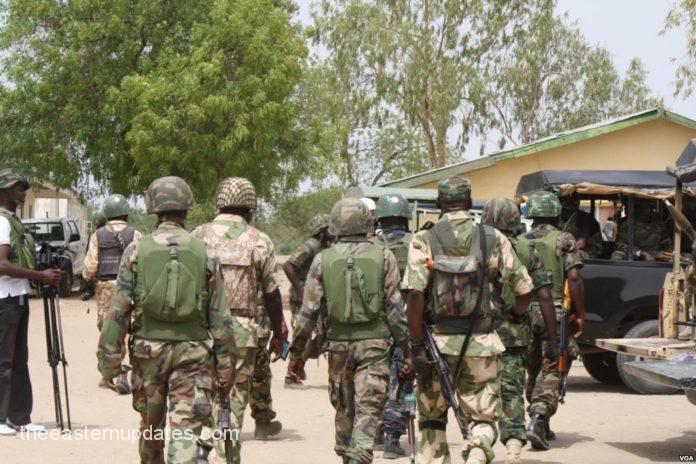 According to CSP Michael Abattam, the Police Public Relations Officer in the state,  Chiwendu popularly known as Onye-army, was nabbed by operatives of the Imo State Police Command at his father’s funeral on December 23 in his hometown in Aboh Mbaise after a diligent gathering of both credible and technical intelligence.

He added that the suspected vicious terrorist is a commander and member of the Indigenous People of Biafra (IPOB) and its militia arm, Eastern Security Network, and has confessed to be behind the killing of two INEC staff at Ihitte Uboma Local Government Area of Imo State in April 2022.

Read Also: Army, Others Deployed To INEC Offices In Imo Over Attacks

The Eastern Updates reports that the suspect is also said to have spearheaded the operation that led to the killing of former presidential aide, Ahmed Gulak in May 2021 as well as orchestrated the kidnap of two expatriates along Okigwe Road two weeks ago and has been involved in high-level killings, kidnapping, and burning of INEC offices and government facilities across the state.

The suspect became the Operational Commander and Chief Trainer of the militia arm of the proscribed Indigenous People of Biafra, Eastern Security Network where he claimed to have trained over 1,000 members in weaponry and terror attack in their camp located in Ogbotoukwu, a forest, in Obowo Local Government Area of the state.

While the suspect allegedly killed the Labour Party Senatorial candidate, burning of his house and Jeep, he is said to have led his gang members including one Okechukwu Duru and others, to kidnap one Jude Nwahiri on November 4, 2021, collected N21 million as ransom after killing four persons in the residence of the victim at Amaohuru Nguru in Aboh Mbaise LGA.

Police authorities also accused the suspect of being behind the murder of the traditional ruler of Amaohuru Nguru Aboh Mbaise LGA, Eze Anthony Anyanwu on December 10, 2021  as well as the murder of a native doctor in Amaohuru Nguru, Uzodimma Ahaiwe.

Others include the murder of one Ugochukwu Olewuike aka Taco; the youth leader of Amaohuru Nguru Aboh Mbaise LGA Imo State; the murder of one Krubo surname unknown native of Obohia in Ahiazu Mbaise; the killing of one Police Inspector and Police Sergeant at Aboh Mbaise Police Station the day his terrorist gang attacked and burnt the police station, among several other operations.