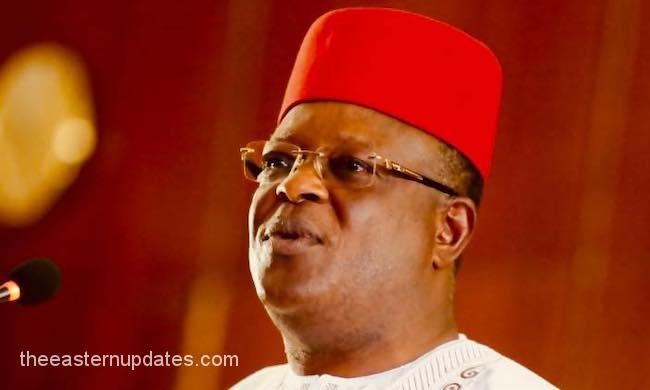 The Governor of Ebonyi State, David Umahi has ordered security agencies to arrest the state chairman of All Progressives Congress (APC), Stanley Okoro Emegha, over the alleged murder and razing of houses at Ekoli Edda community in Afikpo South Local Government Area.

Umahi also ordered the immediate arrest of the APC House of Representatives candidate, Chief Eni Uduma Chima, who is contesting for Afikpo North/Afikpo South Federal Constituency in the national assembly.

The governor issued the directive during an on-the-spot assessment of the level of damages in the area, wherein three persons (3) were shot dead by gunmen and razed houses in Ekoli Edda community.

The Eastern Updates gathered that the duo was fingered to have hands in the recent alleged killing, destruction of properties worth millions of Naria, and Youths unrest that is rocking the Ekoli Edda community.

The governor, in a statement signed and made available to The Eastern Updates through the Special Assistant on Media and Strategy, Chooks Oko further stressed that: ‘Governor David Umahi directed the immediate arrest and prosecution of the State APC Chairman, Chief Stanley Emegha and Candidate for their roles in the murder of three persons in Ekoli Edda,’ he stated.

Umahi, however, directed the Commissioner of Police, Aliyu Garba to arrest all those connected with the carnage and ensure they face justice.

The Governor also announced the immediate suspension of all social gatherings in Ekoli Edda until normalcy returns, and further urged the Commissioner of Police to saturate the area with security presence to forestall further breakdown of law and order.

In a related development, the Commissioner of Police, Aliyu Garba confirmed the killing of 3 boys by gunmen.

CP Garba in a statement signed and issued to newsmen in Abakaliki confirmed that the squabble started when Ebubeagu operatives who accompanied Stanley Emegha and another group of men purported to be loyalists of Chima Eni who is the House of Representatives candidate of APC, clashed at Ekoli-Edda community.

According to Garba: ‘Ebonyi State Police Command is presently investigating a case of Murder, Arson and Malicious Damages to Government properties and individuals’ resulting from apparent struggle for supremacy and who controls the area politically among two notable political stalwarts in Ekoli-Edda, Afikpo South LGA of the State.

‘A youth leader identified as Eseni Kalu Egwu was fatally wounded, later rushed to a neighboring hospital at Ohafia, Abia State where he was confirmed dead.’

‘Angered by his death, the youth of the area mobilized and went on rampage, killing Eme Orji, a younger brother of Chief Stanley Okoro Emegha and an Inspector of Police attached to the Special Protection Unit, SPU, he stated.