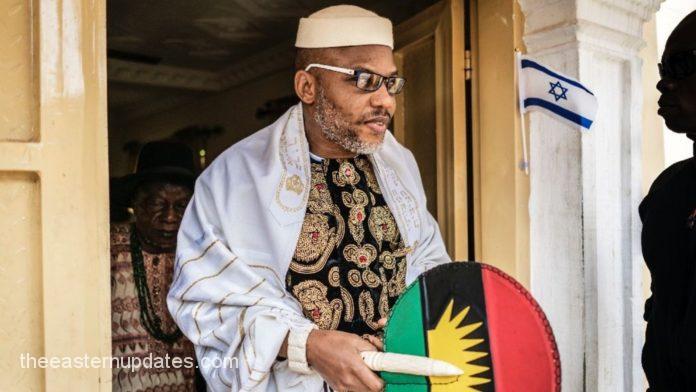 Leader of the Indigenous People of Biafra (IPOB), Nnamdi Kanu, has called for an end to all the violence in the South East.

A statement, yesterday, by spokesperson for the group, Emma Powerful, which was made available to The Eastern Updates quoted Kanu as ordering  the Eastern Security Network (ESN) to stop all forms of violence across the South East and ensure the region is safe for everybody.

He said the people of the South East must be allowed to enjoy the Christmas season in peace.

“It is imperative to deliver the message from our great leader, Nnamdi Kanu, to all Biafrans, both home and abroad, including the big and small politicians and business persons in Biafraland, to stop all forms of violence and tension against our people, as our enemies are relentlessly exploiting our people and recruiting criminals to destroy, in particular, Igbo land, and blame it on IPOB.

“This message is coming from our great prophet and indefatigable liberator, Mazi Nnamdi Kanu, who has been illegally detained in DSS custody by the Nigerian government for over one year.

“He conveyed the message through his lawyers during their visit to him at Abuja DSS custody today, Thursday, December 22, 2022.

“Our leader issued a stern warning to those who are contracted and bought by the criminal believing that he is IPOB member and Mazi Nnamdi Kanu’s disciple to foment trouble in the eastern region, to desist from being agents of destabilisation because they cannot succeed. He said anybody causing problems in the region must be dealt with, no matter how high the person’s level may be, anytime, any day.

“Kanu said nobody should disturb or threaten our people this festive season.

“Our enemies’ plans are to destabilise Igbo land using IPOB and ESN’s names as enemies of the Biafra struggle, but they have failed woefully and can’t resurrect again because we have defeated them completely.

“He urged IPOB leadership to ensure that our land is peaceful and ESN operatives should focus on making our land peaceful and crime-free this festive season.

Mazi Nnamdi Kanu ordered that anybody seen or caught kidnapping, snatching people’s cars or terrorising our people in any way should be dealt with.”