Goods Worth Millions Destroys By Fire At Imo Timber Market 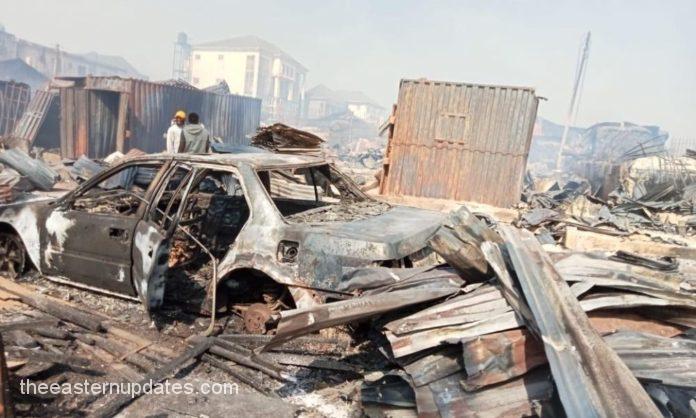 Reports reaching the desk of The Eastern Updates has it that a midnight fire yesterday razed the timber market on Whetheral Road in Owerri, Imo State.

Eyewitnesses who visited the scene disclosed that they saw residents counting their losses.

Some of the victims who spoke to reporters stated that the fire started at about 1am and destroyed valuable goods before their owners arrived.

One of them said, ‘We called firefighters. They came with just a tank of water. The fire was too much and they couldn’t quench it. They left and told us that their water was finished. Several hours later, they have not returned. As you can see, the fire is still causing further damage.’

Another victim said he lost two machines and other assets to the fire.

He said, ‘I lost two machines and other things. We didn’t take out a pin from the shops. Everything is lost. The loss is unbearable. It is a black Christmas for us. We don’t know where to go from here. Nobody knows the cause of the outbreak.’

Another victim said, ‘The annoying thing is that people offloaded goods worth millions (of naira) last night and went home, only to be called hours later that the market was on fire. This is unbearable. I suspect foul play. The government should probe this incident.

‘A customer came here and bought wood worth N7.5m. He said he was coming this morning to carry it. I don’t even know what he will do now. Will he seek a refund? If he does that where will the shop owner get it? ‘

The Eastern Updates reports that there has been a surge in fire outbreaks in recent times.