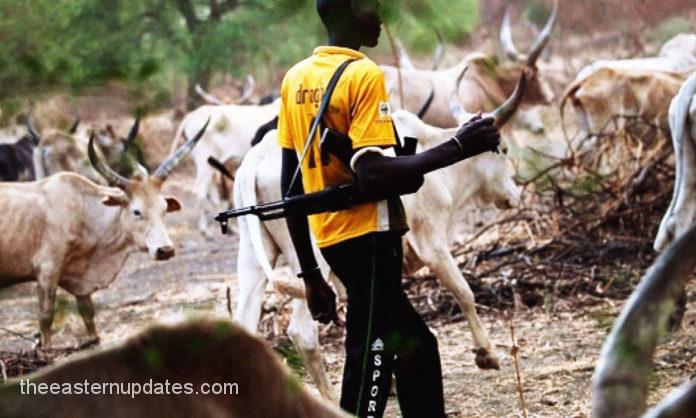 A yet-to-be-ascertained number of people have been reportedly killed in the troubled Ebor, Eha-Amufu community in Isi-Uzo Local Government Area of Enugu State on Sunday by armed herdsmen and their collaborators.

Security sources told reporters that the invaders who outnumbered the soldiers and local vigilantes, launched the attack on early Sunday morning, adding that several people were killed.

‘As I speak to you, we are combing bushes in search of the bodies of those killed. I can’t tell now the exact number of people killed.

‘From the report I received, the armed herdsmen and their collaborators from Benue State communities launched the attack around 5:30 am to 6 am this Sunday morning. Before we got there, several people have been killed.’

‘We are just a few soldiers here and where we are based is a little bit far from the community. There are no other security operatives from other security agencies here in Eha-Amufu helping except the local vigilantes. They (vigilantes) first engaged them but the invading armed herdsmen outnumbered them,’ a security source said.

A community leader, who gave his name as Ogbuabor Samuel, confirmed the attack.

‘As I speaking to you, the invading armed herdsmen are still shooting. Several people have been killed, at least we have recovered the bodies of 10 people.’

Blaming the local government chairman, whom he described as playing politics with the lives of Eha-Amufu because of the 2023 general elections.

‘The chairman of the Isi-Uzo local government area is playing politics with our lives. He didn’t want to tell the governor the true facts of what is happening in our community. He is not supporting the local vigilantes and other local security.

‘A few weeks ago, he dissolved all the local vigilantes formed by Eha-Amufu communities yet he hardly visit the affected communities. We need the government to declare a security emergency in Eha-Amufu, especially in Ebor, Umujiovu, Mgbuji and Agu-Amede communities. Governor Ifeanyi Ugwuanyi should do something drastic. His government should stop politicising the situation in our place.

‘They should stop fabricating stories that our people are collaborating in our situations. That is a fallacy and diverts attention from the real issues. Agala people in Benue State have joined forces with armed herdsmen attacking and killing our people every day. They have sacked several villages and occupied them. They have destroyed our people’s livelihood. Properties worth millions have been destroyed and those in political positions in Enugu State are playing politics with it?

‘Since these recent attacks started in October, we haven’t seen policemen. You can only see police if their commissioner is coming to witness the destruction. And when the commissioner goes back to Enugu, he starts dishing out false narratives. Where are the tactical squad and operational assets of the police he told Nigerians through the media that he had deployed to Eha-Amufu?

The Eastern Updates recall that the last attack on Ebor and Umujiovu communities on December 8, 2022, claimed 25 lives but the Enugu State Police Command told the media that only four people were killed.