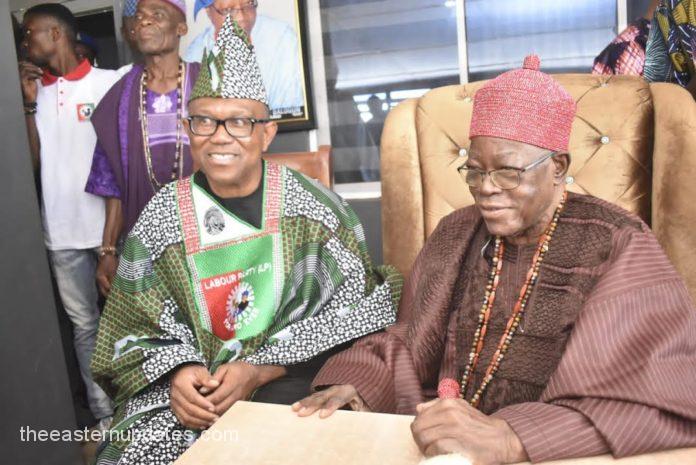 Ahead of next year’s general elections, the presidential candidate of the Labour Party (LP) for the 2023 election, Peter Obi on Saturday paid a visit to the Olubadan of Ibadanland, Oba Olalekan Balogun, Alli-Okunmade II, to solicit the support of Ibadan for the realisation of his presidential ambition.

The former Governor of Anambra State was accompanied to the private palace of the Olubadan at Alarere in Ibadan by the governorship candidate of LP in Oyo State, Taofiq Akinwale, the Director-General of the campaign organisation, Dr. Doyin Okupe, Akin Osuntokun, Chief Sola Ebiseni, as well as Secretary-General, Afenifere, Chief Mrs. Bola Doherty.

Speaking on the purpose of his visit, Obi said the 2023 presidential election should not be about tribe, ethnicity, and religion, adding that all the variables were elite’s conspiracy to keep down the nation.

Read Also: 2023: Obi Will Only Lose On One Condition – LP Secretary

He lamented that virtually all the infrastructures belonging to the Federal Government in the states had collapsed, making movement and meaningful development almost impossible.

‘The government to be formed by the Labour Party (LP) come May 2023 would fight corruption because there can never be any progress under the regime where corruption remains the order of the day. By the time corruption is confronted headlong and defeated, criminality will reduce as a lot of jobless youths would be taken out of unemployment and poverty. We must get this country back on its feet and make it work again. This is my message to you Kabiyesi and the people of Ibadanland and I’m sure that with your support, it is doable,’ he stated.

In his response, the Olubadan, Oba Balogun, who spoke through the Otun Balogun of Ibadanland, Tajudeen Ajibola, placed the demand for the creation of Ibadan State before Obi, and his running mate, Datti Baba-Ahmed.

The monarch, however, commended Obi’s exposé on the various problems confronting the country and how he would tackle them to bring about a new Nigeria that citizens would be proud of.