HomeUncategorizedKanu: Tinubu Promises To Negotiate With Agitators In S'East
Uncategorized 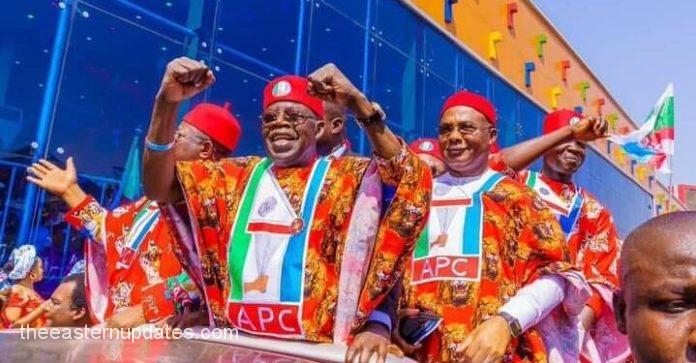 Ahead of next year’s general elections, the presidential candidate of the All Progressives Congress (APC), Bola Tinubu, has vowed to negotiate with all agitators in the Southeast amid Biafra agitation led by Nnamdi Kanu, leader of the Indigenous People of Biafra (IPOB).

According to Tinubu, the negotiation with all agitators would go a long way in ensuring peace in the Southeast if elected president in 2023.

He made the pledge during Thursday’s APC presidential and governorship campaign rally in Ebonyi State.

Tinubu insisted that negotiation was the best way for people to get their demands and complaints rather than resorting to violence.

He also promised to invest in education if elected president.

‘Education is the greatest weapon against poverty. We are going to get our children’s education. We will reform the education sector.

‘We want peace l, we will talk to all agitators. You can’t get your wishes by conflict but by sitting round the table to complain,’ he said.

Lately, Kanu has been at the forefront of agitating for the actualisation of Biafra.

Despite being locked up, IPOB has continued the pursuit of actualising Biafra.

In another report, Governor Abdullahi Sule of Nasarawa State yesterday dismissed polls for the 2023 elections that put the presidential candidate of the Labour Party (LP), Peter Obi ahead of others, including the candidates of the All Progressives Congress (APC) Bola Tinubu and of the Peoples Democratic Party’s (PDP) Atiku Abubakar.

Sule, who spoke during a live interview on Channels Television’s Politics Today, pointed out that the criticisms of Obi, a former governor of Anambra State, by the incumbent Governor Charles Soludo devalued his predecessor as a presidential candidate to less than 10 kobo.

Asked to mention the traits that makes Tinubu stand out from his opponents, Sule said, ‘Today, the current governor of Anambra State where Peter Obi was governor is the right person who will tell what has happened during the period of Peter Obi.

Facebook
Twitter
WhatsApp
Email
Telegram
Previous articleNo One Will Buy Obi For 10 Kobo After Soludo’s Verdict – Sule
Next articleHold Me Responsible If I Fail To Deliver, Kalu Urges Abians