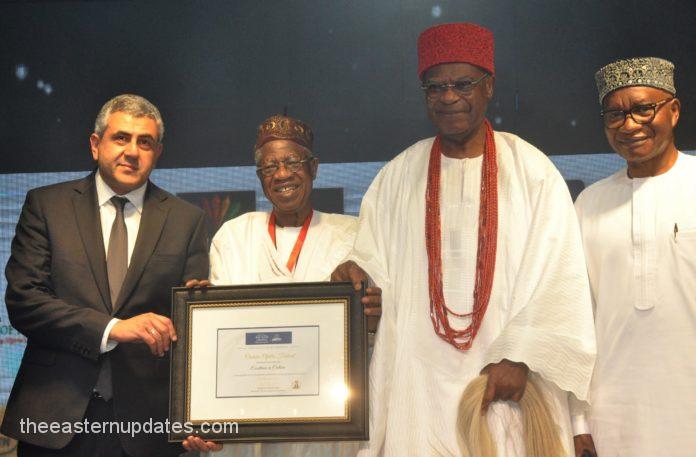 The Ofala festival of the Obi of Onitsha has been awarded by Federal Government with an award of excellence in culture.

The award which was issued in recognition of the contributions of the festival to the development and preservation of Nigeria’s cultural heritage, was made on the occasion of the First United Nations World Tourism Organisation (UNWTO) Global Conference on linking tourism, culture and the creative industries as pathways to recovery and inclusive development, which ended in Lagos recently.

The award was presented in Lagos to the Obi of Onitsha, Prof. Nnaemeka Achebe, at a gala night by the Minister of Information and Culture, Lai Mohammed and the Secretary General of the UNWTO Mr. Zurab Pololikashvili.

The monarch conveyed the appreciation of the Onitsha community to both the Federal Government and the UNWTO.

‘This recognition added to the endorsement of the Ofala by the Nigerian Tourism Development Corporation, as a major Nigerian festival, has further enhanced our goals of attracting considerable national, west African, and international attention to the Ofala and getting the festival to attain the status of a major event in the Nigerian, and by extension in the West Africa cultural/tourism calendar.

‘This honour will serve as a boost to our plans of bringing the world to Onitsha to experience our rich cultural heritage and enhance the growth and development of our community,’ he said.

The Ofala is usually the highpoint of the Onitsha ceremonial cycle, with displays of royal dances, tributes, parades and music running over two days, with the Obi of Onitsha as the celebrant. It is a celebration by the monarch and his subjects of the monarch’s annual emergence from seclusion, during which period the monarch has successfully negotiated the fortunes of the kingdom.

While not losing its essence as an annual traditional and ritual obligation, the extent of the Ofala has been broadened to include an international art exhibition  (Oreze), a youths’ carnival (Ofala Carnival), and a marathon (Onitsha City Marathon) which has been approved by the relevant national and international bodies.

Facebook
Twitter
WhatsApp
Email
Telegram
Previous articleEbonyi 2023: I Will Win Without Rigging – PDP Candidate, Odii
Next articleGod Will Expose Those Behind Insecurity In Imo – Uzodinma