Many Escape Death As Tanker Burst Into Flames In Anambra 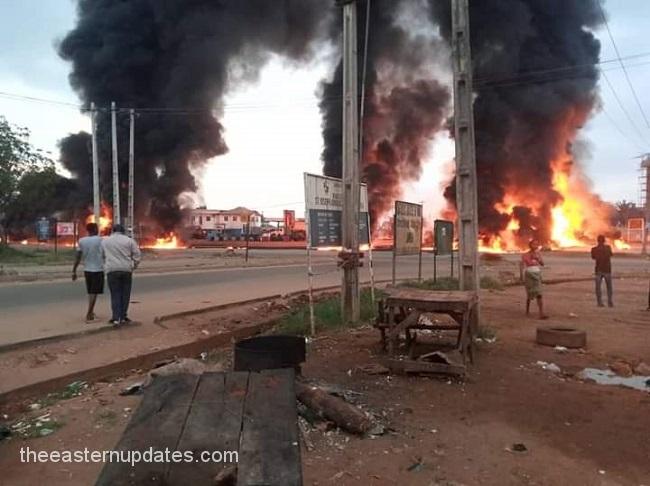 A driver and his conductor on Tuesday narrowly escaped death when their oil-laden tanker crashed and burst into flames at Eze-Uzu junction, Enugu-Onitsha expressway, Agu-Awka in Anambra State.

An eyewitness who spoke to newsmen pointed out that the tanker without registration number was at speed and lost control while trying to negotiate a junction.

The eyewitness disclosed that the tanker caught fire, but no life was lost.

He added that both the driver and his conductor escaped unhurt from the engulfed tanker.

Confirming the incident, the Sector Commander, Federal Road Safety Corps (FRSC), Anambra State, Adeoye Irelewuyi, confirmed that two male adults were involved in the crash, and no life was lost.

In a statement, the corps’ Acting Sector Public Education Officer, RC Margaret B, Onabe, said: ‘An unidentified driver of a tanker laden with oil with no registration number was involved in a minor road traffic crash at Immigration junction by Awka-Enugu Expressway, November 15, 2022, at about 06:50hrs.

‘The probable cause of the minor crash was attributed to speed. The Sector Commander Anambra State Corps Commander Adeoye Irelewuyi, has warned motorists to desist from overspeeding and observe recommended speed limits.’