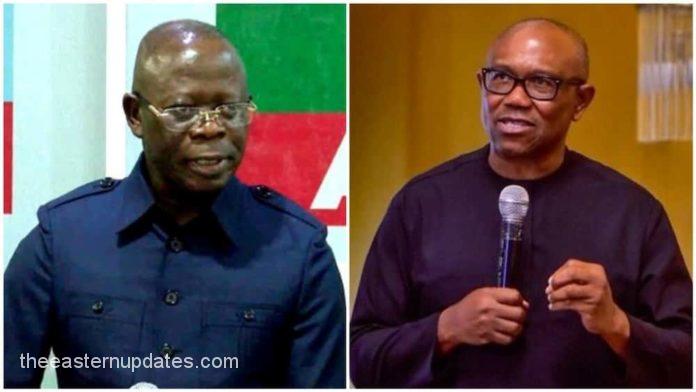 Mr. Adams Oshiomhole who is the Edo North senatorial candidate of the All Progressive Congress (APC) has once again lambasted Peter Obi, accusing of creating jobs abroad while importing unemployment into the country.

Mr. Oshiomhole made this accusation yesterday while speaking at the flag-off of his campaign in Auchi area of the state.

Coincidentally, just like the former Edo governor, Mr. Obi was equally in the state to campaign, an event that overshadowed that of Mr Oshiomhole who blamed him for the high rate of unemployment in Nigeria.

Mammoth crowd trooped to the city to welcome the Anambra former governor who has been in the state since Thursday evening. During the visit, the opposition politician popular among the youths paid courtesy visit to Oba Ewuare II, the revered monarch of Benin and Apostle Johnson Suleman, the general overseer of the Omega Fire Ministries International.

Read Also: Why Peter Obi Was Denied Use Of Stadium In Edo – Obaseki

Narrating how Mr Obi created jobs abroad and imported unemployment, the former national chairman of the APC said by importing foreign goods, the LP candidate, who has vowed to move the country from production to consumption, was contributing to the rising unemployment.

‘Obi owns the biggest shopping mall in Abuja and all the items sold there are imported,’ Mr Oshiomhole said. ‘So if he is selling imported wines, clothes, and other items, he is contributing to why Nigeria is going down because he is creating jobs abroad and importing unemployment to Nigeria.’

The Eastern Updates reports that the country largely depends on imported goods, including premium motor spirit, which President Muhammadu Buhari had promised to put to an end by promising to build one refinery every year when he sought the office but built none seven years after.

The ruling party occasionally blames the opposition and global economic malaises for the high rate of unemployment. In one instance, Mr Buhari described the youths as being lazy.