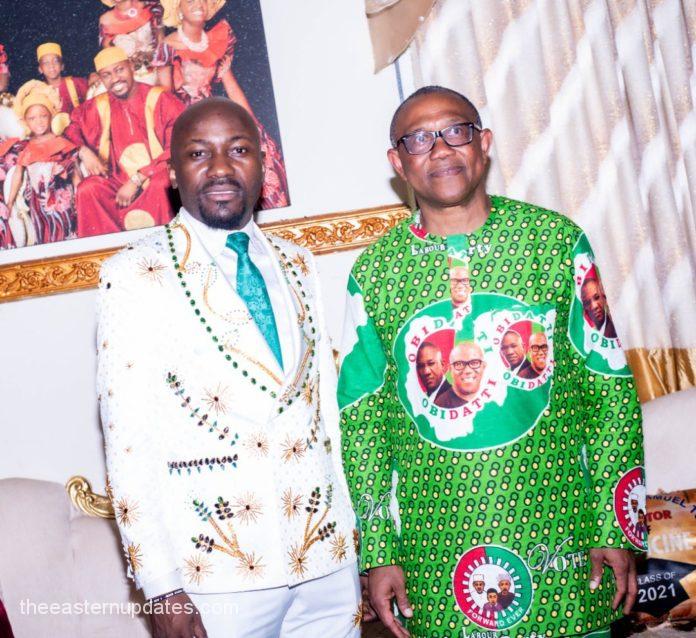 Peter Obi who is the Labour Party, LP, the presidential candidate has on Friday met with Apostle Johnson Suleman of Omega Fire Ministries.

And the meeting had been disclosed by Suleman via his Twitter handle.

a photograph of the meeting, Suleman wrote: “Thank you @PeterObi for coming to the house..may God continually protect you in Jesus name.”

It has also been reported that following the commencement of his presidential campaign, Obi has met with several clergymen and Obi had also visited the Redeemed Christian Church of God, RCCG, with Pastor Enoch Adeboye preaching.

The LP presidential flag bearer had also met with the Methodist Church community.

His visits to these churches had pulled mixed reactions from Nigerians.

However, Obi had said his visit to churches was not for political reasons.

In another report, in lieu of the mega event by the Labour Party and Peter Obi, which has been slated in Abia State, the Abia State Government had already issued a stern warning to other political parties on the use of public spaces for campaigning as Peter Obi, the presidential candidate of the Labour Party, arrives in Abia State to launch Dr. Allex Otti’s governorship campaign.

In a statement which had been issued by Eze Chikamnayo, the state Commissioner for Information and Strategy, the state government said, “It has been brought to the notice of the government that some misguided political parties are now embarking on the willful invasion of school facilities, stadiums, and valuable public premises across the state, all in the name of holding rallies and political campaigns.