HomeFeaturesEkweremadu Should Be Allowed To Defend Himself - Ohanaeze
Features

Ekweremadu Should Be Allowed To Defend Himself – Ohanaeze 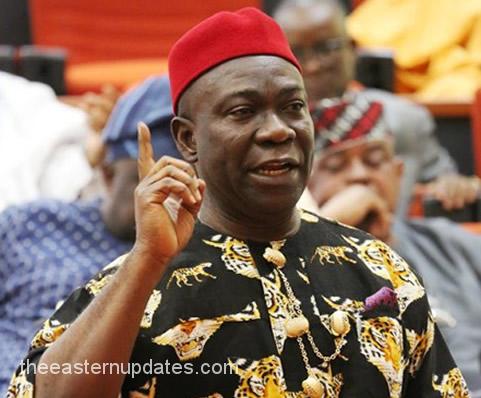 The socio-cultural group gave the charge in a statement issued by its National Publicity Secretary Mr. Alex Ogbonnia.

The Eastern Updates recalls that Justice Inyang Ekwo of the Federal High Court on Friday in Abuja ordered an interim forfeiture of 40 landed properties linked to the former Deputy Senate President.

The landed properties comprise 15 in Abuja, 10 in Enugu (Ekweremadu’s home state), one in Lagos, two in the United Kingdom, three in the United States, and nine in Dubai in the United Arab Emirates.

The court’s order followed an ex-parte motion filed and moved by counsel to the EFCC, Mr Ibrahim Buba.

Ogbonnia stated that Ekweremadu, currently standing trial in the UK over alleged organ trafficking should be given an opportunity to defend himself and be made to face the wrath of the law if found culpable.

‘Ohanaeze Ndigbo stands on a moral probity to state that a hasty ex-parte motion, filed by the EFCC on a man who is undergoing some travails in the UK, falls short of ethical standards and natural justice.

‘We maintain that Sen. Ekweremadu should be given the opportunity to defend himself on his properties; and if found wanting, should surely face the consequences.

‘We are aware that there are several allegations of corruption cases pending in the EFCC, but the urgency and selective judgment in the case of Ekweremadu is curious.

Meanwhile, Senator Ekweremadu is set to remain in UK custody till 2023.