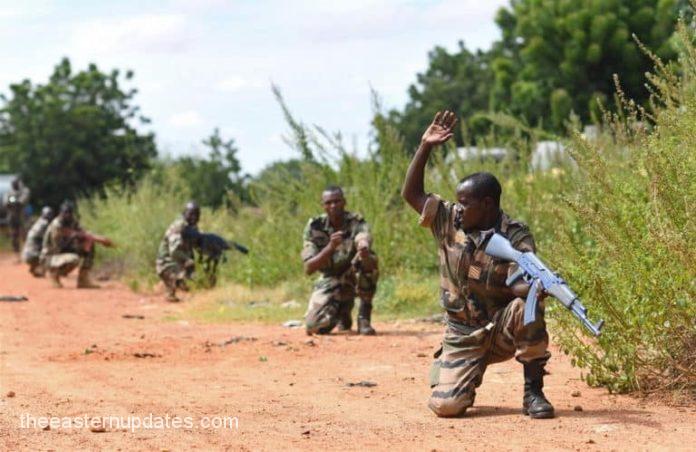 Reports reaching the desk of The Eastern Updates have it that soldiers have reportedly killed no fewer than three gunmen in Umunze community, Orumba South Local Government Area of Anambra State.

Sources who preferred to speak under the condition of anonymity pointed out that the gunmen had first opened fire on the soldiers but were neutralised by the military men who had superior firepower.

This came barely weeks after the gunmen killed three army officers and one civilian at the Nkwo Market area of the community.

It was gathered that the gunmen succumbed to the superior firepower of the soldiers despite the charms which they reportedly wore all over their bodies.

The neutralised criminals were believed to be part of the criminal gangs terrorising and killing innocent people in the state.

There has been a new wave of criminality lately in various parts of the state especially kidnappings that have been recorded in some areas.

Efforts to speak with the Police Public Relations Officer in the state, DSP Tochukwu Ikenga, proved abortive as his phone was not reachable as at the time of filing this report.

In another report, against the backdrop of recent reports, the Traditional rulers in Idemili North and South local government areas of Anambra State have denied ever endorsing the candidacy of the presidential candidate of the Peoples Democratic Party (PDP), Atiku Abubakar for the 2023 polls.

In a statement made available to The Eastern Updates on Tuesday by the chairman of their forum, Igwe Chuma Agbala, and vice-chairman, Igwe Nick Obi, pointed out that the trending report that they endorsed Atiku during their quarterly meeting was false.

They explained that what happened was that one of their illustrious sons, Chief Obiora Okonkwo, paid them a visit them during the meeting held in Ogidi and informed them of his new position in his party, the PDP and that nothing more happened.