HomeFeaturesAgony As Many Trapped Following Church Collapse In Anambra
Features

Agony As Many Trapped Following Church Collapse In Anambra 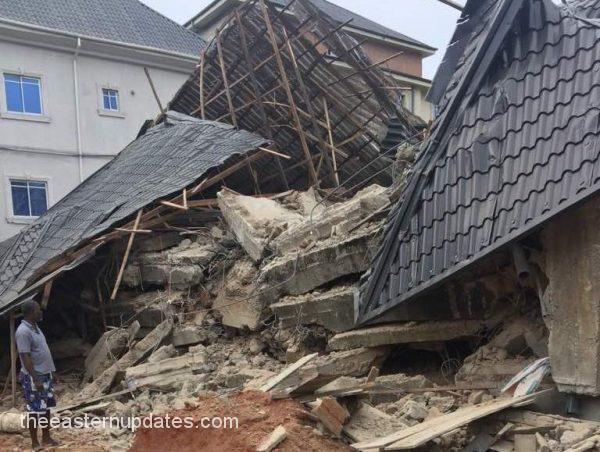 The Eastern Updates gathered that the incident happened on Sunday morning.

The community is one of the many parts of the state battling flooding which is believed to have caused the collapse.

As of the time of filing this report, the number of casualties cannot be ascertained but residents are still making efforts to rescue trapped victims.

This is coming barely 48hrs after an ill-fated boat carrying about 85 passengers capsized at Umunnankwo Community in the same Ogbaru LGA with many reportedly dead.

The police authorities and other relevant agencies were yet to respond to the development.

The Zonal Coordinator of the National Emergency Management Agency, South-East, Mr Thickman Tanimu, told NAN in a telephone interview on Saturday in Awka that 85 persons had boarded a boat in an attempt to escape to escape the rising water level but that the boat capsized on the way, leading to the death of 76 persons.

He lamented that it would be difficult to access the area due to the high level of water.

Tanimu explained that people refused to relocate in spite of the sensitisation and warnings because they thought the current flooding situation was the usual flood water that would eventually recede.

He added, ‘The report we are receiving is that as at yesterday (Friday), the flood level rose above the 2012 flood level by 11 per cent. What I suspected happened yesterday at Ogbaru, Anambra State, going by the report we received from the State Emergency Management Agency is that the water kept rising and the people were trapped.

‘They decided to escape the rising water and 85 of them jam-packed inside the boat which capsized due to the rising flood. It is very unfortunate because the flood has covered many houses up to roof level. Out of the 85 persons, nine were found and the remaining 76 are nowhere to be found.

‘Also at Uzo-Uwani Local Government Area in Enugu, two men and a pregnant woman died in the flood. It is sad to note that as of yesterday (Friday), we recorded 79 deaths due to the rising flood; 76 in Anambra and three in Enugu.’

Tanimu said the agency was in talks with the military in Onitsha and Abuja to activate the Disaster Response Unit to airlift trapped residents in the affected communities.