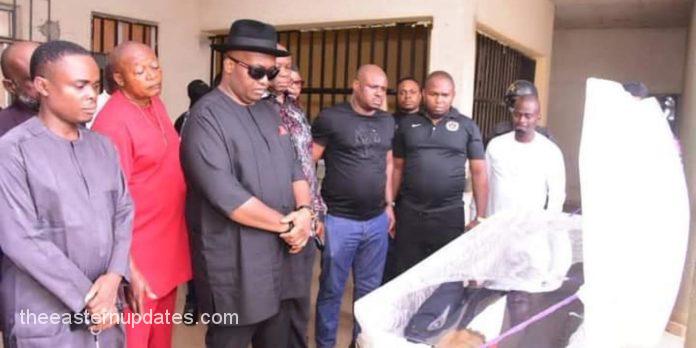 The Senator representing Anambra Central District, Iyom Uche Ekwunife, has described the attack on her colleague, Senator Ifeanyi Ubah as an assassination attempt on his life.

Ekwunife who made this disclosure at the funeral ceremony of Mr Ikechukwu Obum one of the Aides to Ubah who, was killed by gunmen last month, contended that this was not the Anambra State that people knew.

She said: ‘I lack words to express how I feel about what happened and I also lack words to console my colleague, Senator Ifeanyi Ubah over the death of two of his trusted staff but God says in everything we should give him thanks.

‘I thank God for saving the life of Ifeanyi Ubah because it would have been the other way but God said no. For me, I call it an assassination attempt on his life and nothing more.”

At the graveside, it took the assistance of Senator Ekwunife and top politicians across political parties to hold Senator Ubah who wept uncontrollably as his most trusted Aides were being lowered and he could not speak to reporters due to his psychological disposition.

Meanwhile, fresh facts also emerged at the funeral over how the incident occurred as a close business friend and secondary schoolmate to Sen Ubah (names withheld ) narrated that the gunmen first opened fire on the bullet-proof Sports Utility Vehicle (SUV) in which he and Ubah were travelling.

‘I have always carried Senator Ubah on my SUV and he likes to sit in front on the passenger side.

‘But before the incident, my vehicle had problems on my way to Owerri from Asaba. So, I had to join him in his own jeep and the gunmen came straight to the front of the jeep and opened fire.

‘Had it been that my SUV didn’t have problems I would have carried the Senator in my SUV and it is not a bulletproof vehicle, both of us would have gone by now.

‘It was my vehicle problem that saved Senator Ubah and myself from the barrels of the gunmen,’ the friend narrated.

He further confirmed that a security operative attached to Sen Ubah returned fire and killed one of the gunmen and injured two of their gang members but they carried them into their vehicle.