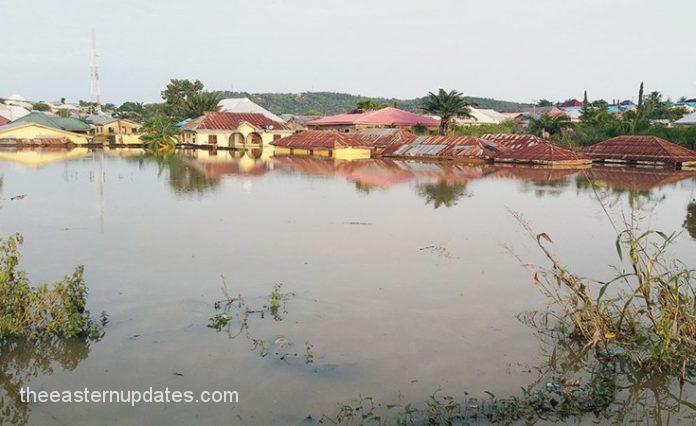 No fewer than 15 communities have so far been submerged in floods by the overflowing of Oguta lake in Oguta local government area of Imo State.

The incident followed heavy rains experienced in the past few days.

The river bank overflew and the flood destroyed farmlands and personal belongings worth several millions.

Many buildings, including hotels were submerged as at Friday when The Eastern Updates visited the place.

Many residents at Amaraocha in Oguta LGA have already abandoned their homes to seek shelter in several places while some people were seen trying to salvage what remained of their personal properties.

Some of the fleeing residents told our correspondent that many of them could not save their properties as some of them were taken unawares by the ravaging flood which submerged their buildings.

In a related development, the Anambra State Governor, Professor Chukwuma Soludo, has sought the support of governments at all levels, agencies, and individuals to tackle flooding currently ravaging some parts of the country, including the state.

Soludo pointed out that the flood water emanated and surged from Cameroon, asking the Federal Government to dialogue with the government of Cameroon with a view to proffering lasting solutions.

He made the call on Thursday when he visited the Internally Displaced Persons’ camps set up for flood victims in Onitsha North Local Government Area, while also receiving displaced persons from Anambra West and IDP camps at Umuoba Anam and Ekpe Nneyi, Umueri in Anambra East Local Government Area.

The governor called for support to help alleviate the hardship faced by people displaced by the flooding across the country at large and Anambra State in particular.

In a related, the Bayelsa State Government has announced the constitution of a task force to mitigate the impact of flooding in the state.