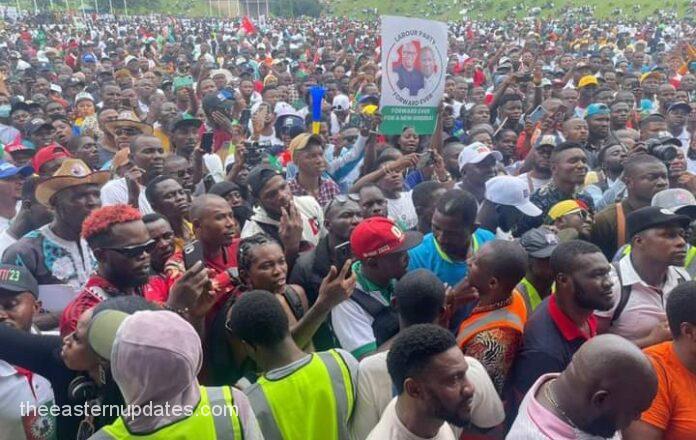 Thousands of supporters of Mr. Peter Obi who is the presidential candidate of the Labour Party staged a peaceful rally in Abuja on Saturday.

The pro-Obi supporters marched from the Unity Fountain to the Moshood Abiola National Stadium amid heavy security.

The Eastern Updates reports the rally alongside the pro-Obi supporters were officers of the Nigeria Police Force and the Federal Road Safety Corps.

The supporters are making a statement that Obi and his running mate, Datti Baba-Ahmed, have physical structures beyond social media.

One of the highlights of Saturday’s march was when a newly wedded coupled joined the rally in the nation’s capital. The move drew the attention of Obi who took to his social media handle to hail the couple.

“Salute and congratulations to this newly wedded couple in Abuja, whose special day coincided with the Obidient Family March in Abuja; and they marched too!” the presidential candidate tweeted.

“Wishing you both a blissful and happy married life and children, who will grow up in a united, secure, and productive Nigeria.”

Demonstrators had last week staged a peaceful rally in Ebonyi State, in Nigeria’s South-East, as well as other states across the Federation.

In his reaction to the rallies, the National Chairman of the party,  Barrister Julius Abure, said the development shows the acceptability level of the LP.

“The rallies are not surprising, it is because the Labour Party has a people-oriented candidate that will work for the people and that will effectively serve the interest of the party,” he said in a statement on Saturday.

For him, the rallies showed that the people are driving the process and realise what the party means to them and the future.