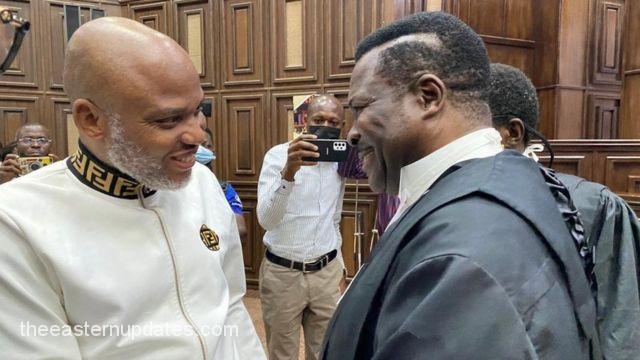 Ifeanyi Ejiofor, who is the counsel to the detained leader of the proscribed Indigenous People of Biafra (IPOB) Nnamdi Kanu, has made some recent revelations that his client has been diagnosed with a gastrointestinal disorder.

In a statement which he had put out on Monday, Ejiofor said the development followed a persistent heartburn which had been earlier experienced by the secessionist.

According to the lawyer, despite the order of Justice Binta Nyako of a Federal High Court in Abuja that Kanu should be given serious medical attention, the Department of State Services, DSS has been acting on the contrary.

“Unfortunately, the DSS have denied him the least of the prescribed pain killer tablets that could provide momentary relief.

“Following this development, our erudite lead counsel, Chief Mike Ozekhome (SAN) has immediately swung into action to ensure immediate end to this maltreatment and impunity.”

In another report, the Abuja division of the Court of Appeal has reserved judgment on the appeal lodged by the detained leader of the Indigenous People of Biafra (IPOB), Nnamdi Kanu, seeking to quash the terrorism and treasonable felony charge filed against him by the Federal Government.

Presently standing trial before the Abuja division of the Federal High Court, Kanu through his legal team anchored by Chief Mike Ozekhome, SAN, is challenging the competence and validity of the charges preferred against him.

In his appeal No: CA/ABJ/CR/625/2022, dated April 29, Kanu argued that since the present charges against him lacked legal competence, he should be discharged and acquitted.

Before that, he urged the appellate court to carry a review on the April 8 ruling of the Federal High Court, which struck out only eight out of the entire 15-count charge.

During the court session yesterday, Justice Jummai Hanatu, who led three other justices of the court, said it had no need to delve into the issue of bail since the substantive appeal was ripe for hearing.