HomePoliticsDetails Of Attack On Ifeanyi Uba’s Convoy In Anambra
Politics

Details Of Attack On Ifeanyi Uba’s Convoy In Anambra 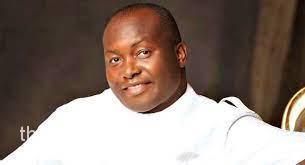 Fresh reports reaching the desk of The Eastern Updates have revealed that some police escorts in the convoy of Senator Ifeanyi Ubah representing Anambra South senatorial zone have been killed when he had been attacked at Enugwu Ukwu in Njikoka local government area of the state on Sunday.

An eye witness had been revealed that the senator was reportedly injured in the attack in which some people described as an assassination attempt on the Young Peoples Party, YPP, senator.

An eyewitness said: “Ifeanyi Ubah’s convoy came under attack in Enugwu Ukwu this evening. He was ambushed by heavily armed men who opened fire on his convoy. Some of his aides were killed, including some police officers.

“The senator managed to escape as his car was riddled with bullets.

“I was driving up to that spot from the link road to the express when some people in a shop shouted at me and asked me to turn back and take another road, which I did”.

The state police command is yet to react on the attack.

In another report, a Federal High Court sitting in Lagos has fixed May 24, for the arraignment of the Senator representing Anambra South constituency in the National Assembly, Ifeanyi Ubah and his firm Capital Oil and Gas Industries in connection with a disputed ₦135 billion debt.

Justice Nicholas Oweibo fixed the date following a consensus between the prosecutor, the Asset Management Corporation of Nigeria (AMCON) and the defendant’s counsel.

Justice Oweibo also granted an application directing AMCON to either paste the eight-count charge it filed against the lawmaker and his firm at his residence or serve him via the Clerk of the National Assembly.