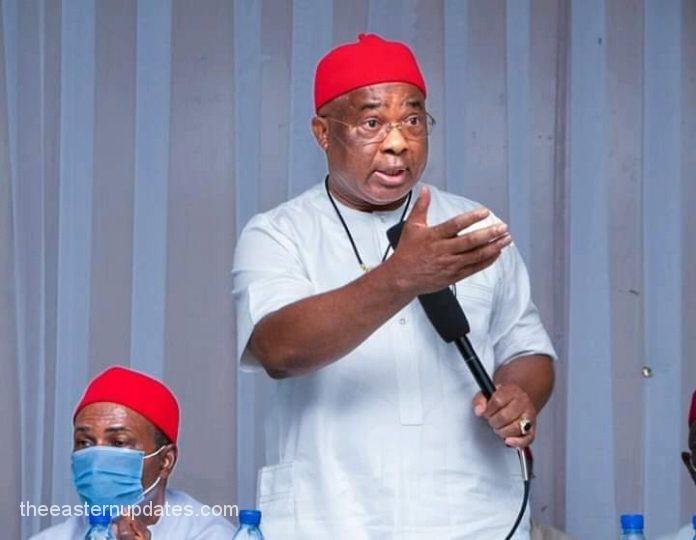 The Imo State Governor, Hope Uzodimma has revealed that he has finally received the report of the Commission of Inquiry into the mayhem which had engulfed Izombe area of the state in October 2021 nearly a year later.

The Governor had also assented to receiving the report at the New Exco Chamber, Government House Owerri on Wednesday, the governor thanked the chairman and members for a thorough job, which he said “will go a long way in assuaging the problems of insecurity in the area in question in particular and Imo State in general.”

He had also saluted some of the the members for their diligence in dealing with the situation, particularly the painstaking way they looked at the various issues at stake, noting that their report “will help calm frayed nerves and tension.”

Governor Hope Uzodinma said he is convinced that “the report will help the government bring to rest the insecurity situation in the state.”

In expressing happiness over the good job the panel did, he had also noted that the members justified the confidence reposed in them, adding that from time to time they will be invited to assist the government to look into issues that will help bring peace and development in Imo State.

Governor Uzodimma further assured the Committee that the government will look into their recommendations and apply them appropriately.

In another report, The Governor of Imo State, Hope Uzodinma has expressed sincere optimism that the state would come out from her present challenges if residents fervently approached God in prayers.

The Eastern Updates reports that governor made this known while speaking at the second edition of ‘Imo Unity Prayer and Praise Convention’ which was organised by the Imo chapter of the Christian Association of Nigeria (CAN), in Owerri yesterday.

In his remarks, Uzodinma asserted that the event was appropriate as the state had been able to surmount its security challenges thanks to the faithfulness and grace of God.

He thanked CAN for organising the event and urged Imo people to continue to pray and thank God, adding that ‘he hears our prayers’.