Mega Rally In Onitsha Held For Peter Obi By Supporters 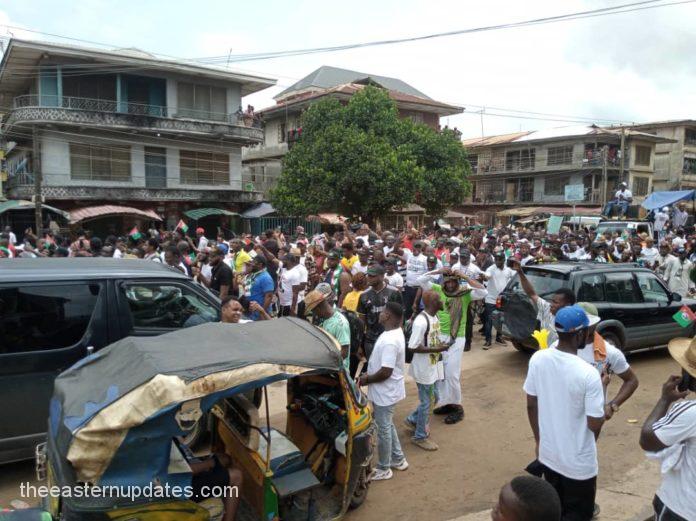 Some of the supporters and well wishers of Mr Peter Obi who is the presidential candidate of the Labour Party (LP) and a former Governor of Anambra State had on Sunday held a massive rally in the commercial city of Onitsha in Anambra State, while shutting down most of the major streets in the city.

Some of the young men and women who had been doning white polo shirts with Obi’s picture and inscription of his party started gathering at Zik Avenue at around 11:30am, from where they moved to other parts of the town.

The group had also been seen with banners with several inscriptions supporting Obi and marched peacefully along most streets, while terminating at the Chinua Achebe’s Stadium, Fegge, Onitsha.

Convener of the rally, Mr Chibuike Akpotue, who addressed supporters said: “We just want to show the world that Obi has our support, he was born in Onitsha, he grew up in Onitsha, his businesses are here. So, we decided today to show him solidarity because we were told he does not have structure, we want to tell them we are his structure.

“This is not about the Labour Party. The most important thing is that we want someone that can change the economy of this country. Since I graduated, I did not find any job to do and I went into business, which is not a bad idea.

“We are looking for a person that can turn around the economy of this country for good and not a party. Check out Obi’s record as Anambra governor, you will see that he is the only governor that served eight years and yet never had any issue with the EFCC and he goes out without any escort.”

The groups tagged the rally, ‘Onitsha mega rally: The mother of all rallies’ caused a gridlock with many motorists diverting to other routes as the supporters sang Obi’s praise during the long trek.