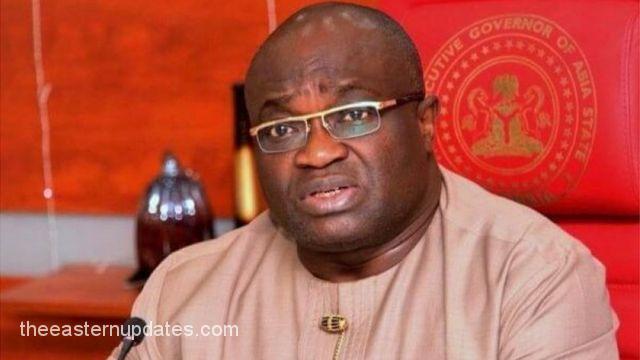 In lieu of the recent statments by the Abia State Governor, the All Progressives Congress, APC, in Abia State, has come out to blast Governot Okezie Ikpeazu over his recent claims that his administration had built and commissioned 150 roads across the state.

The Eastern Updates had reported that Governor Ikpeazu had in his broadcast on August 27 to mark the 31st anniversary of the creation of Abia made a disclosure that his government had orchestrated the building of 150 roads in the state.

However, the APC in a statement by its state chairman, Dr. Kingsley Ononogbu, in a reaction to Ikpeazu’s broadcast, said that the governor awarded himself outlandish marks of performance, arguing that such number of roads could only exist in the imagination of the Governor.

He alleged that Ikpeazu has subjected the people to years of woes, agony and outright failure of governance.

He said; “In celebrating Abia state at 31, Abians should ideally be celebrating monumental developmental strides given the enormous human and material resources we are endowed with as a people by the Almighty God.

“But in reality and in all honesty, Abians are merely celebrating the anniversary of the creation of the state with nothing concrete on the ground to show for the 31 years of existence when compared with other neighboring States and others created at the same time.

“The Abia ugly narrative has long become an embarrassment even to the players in the successive administrations since the creation of the State. There is actually nothing to celebrate within the developmental indices, suggesting that what this time calls for is sober reflection by all Abians and to ask ourselves pertinent questions.’

He stated that people of the state should be interrogating themselves on how their state got to this level of underdevelopment and what must be done to reverse the ugly trend as the 2023 general election draws near.

“These questions and answers are critical at this crucial point in time to avoid a repeat of the mistakes of the past. Abians should cry no more, search no more and look no further because God has heard our cries and prayers by touching credible Abia sons and daughters to take interest in politics.”

He pledged that the APC will change the narrative positively and lead the State to the desired vision of a New Abia.